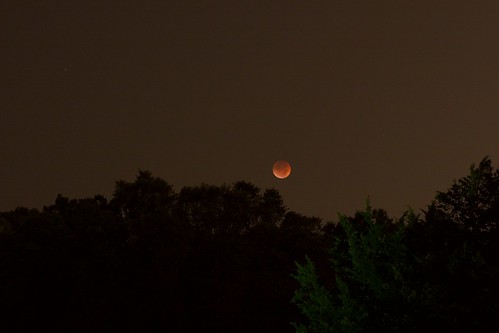 I successfully dragged my ass out of bed early enough this morning to catch the lunar eclipse. I drove to percy warner park, which as it turns out was probably entirely unnecessary, as the light pollution from Belle Meade Boulevard is worse than I expected, and I was too lazy to drive into the park itself. I should have gone to Vandy’s observatory. Anyone know if they are open for these sorts of things? I assume they are..

As you can probably tell, I don’t have a very long lens (it’s all in how you use it, right?), so the results aren’t great. Photographing an eclipse is interesting. It starts off easy enough, as basic moon photography, which is an exercise in stopping down and taking a quick enough exposure, since the moon is pretty damn bright. Then the light goes away, and it gets harder. It becomes an exercise in getting enough light while balancing that with the fact that, well, the moon moves. I found ISO 400 to be a decent sweet-spot to get me enough sensitivity, but even that required 1-4s of exposure, depending on how I stopped down the lens, and sharpness suffered over that time due to movement of the moon itself. Noise was evident at ISO 400, too.

Suggestions for what to do next time? (other than: get a lens longer than 85mm)