Homo sapiens sapiens emerged as a distinct species, say, sometime around 200,000 years ago. Let’s call it the year -197986.00 BCE. We’ll ignore the millions of years of evolution of our predecessors and competitors that preceded our step into the spotlight for now.

For reference, all of “recorded history” (written) has happened since roughly 4,000 BCE. That means that humans have existed for a timespan roughly 50X that of all recorded history. 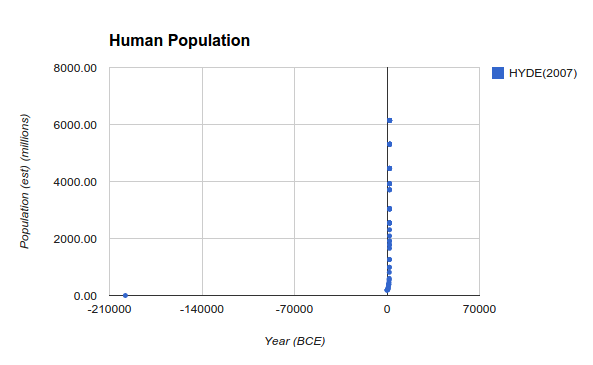 So uh, yeah, not very useful, is it? That’s because all of modern history happened entirely in that remarkable upshoot at the right of the graph. During the 196,000 years prior, we were all still noodling around on the plains of Africa in relatively small numbers. The explosive growth of human technology, the correspondingly exponential growth in population, and everything we know or theorize about “human civilization” has occurred in that tiny fraction of the time our species itself has existed on this planet. On an evolutionary timescale, it’s a very small chunk of time, with a near seismic level of change and upheaval, which requires logarithmic scale to even start to visually appreciate. What can we take away from this?

« nashville style hot chicken gentrification and the economics of plunder »