hot chicken that i made and then ate 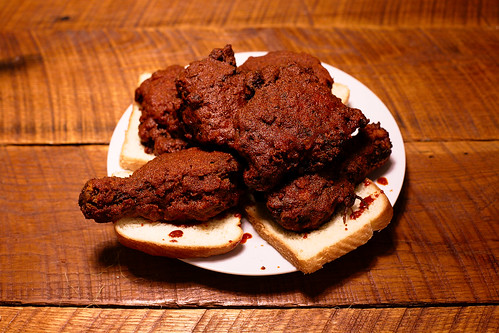 **ADDENDUM:
A few corrections since I wrote this:</p>

So, I decided to try my hand at making hot chicken. I loosely based it around this recipe. Before I get into the specifics, though, I want to pat myself on the back a little. Not for successfully making hot chicken, no, but rather for the fact that when I first tried it 5 years ago, I said to myself: there’s nothing mysterious about this chicken. Magical and wonderful, yes, but not mysterious. It’s obviously a shit-ton of cayenne pepper slathered over fried chicken. So while it may be heretical to downplay the mystery around Nashville’s primary culinary claim to fame, I have to say: it ain’t complicated. I honestly had a much harder time getting the fried chicken right.

That said, a few details, photos and questions:

So there you have it. I feel pretty confident that I can nail it the next time around. As I said above, this dish is not a complicated one, so I think I need to resist my urge to experiment and fuck around. The secret is in the simplicity: a shit-ton of pepper and fried chicken. What more do you need?