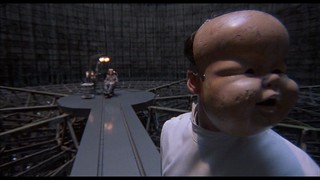 Me: the entire movie has the feel of one big long doctor who episode
Me: except that doctor who never shows up to save anyone
Rev: kind of like real life
Me: basically

We watched Brazil the other night. It’s been a while since I have seen it – way before the latest incarnation of Doctor Who. I was struck by the vast quantity of similarities and seeming influence rooted in Brazil – or at least the “sci fi noir” feel/genre in general. Cassandra at least seems to be a direct nod to (if not a not-so-subtle ripoff of) Sam’s mother.

Side-note: Jack Lint would be a great halloween costume (and an even better dragoncon costume – though it’s probably been done). I researched the mask a bit and it’s hard to find, but I found one guy that makes replicas for $150. A bit steep for a costume. Anyone out there in my vast readership have any 3d modeling experience? It seems like if you could find a decent straight-on shot with shadows (i.e. this one), you could pretty easily map the gradient to pull a z-axis out of it into a 3d model and then use a 3d printer to make it. But I have no idea how to do that. I only know how to talk smart, not do smart.

« a story about boobs movies in the park move: a translation »