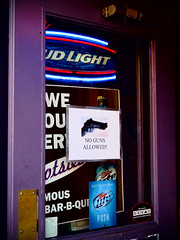 Oy, so I thought I could stay out of this debate. I consider myself a fairly opinionated person. There are tough issues I’m undecided on – there are complicated issues that I’m firm on, and all sorts of areas in between where there’s plenty of room for disagreement and reasoned debate. But man, I feel like I’m living in another universe reading the posts on this whole “Guns in Bars” issue. The vitriole coupled with the sheer disingenuousness is enough to drive a man mad. Or, at least, write a blog post.

So, where to start. First, a slightly petty annoyance that makes a good segue into the deeper issues: I find it irritating that people, when referring to “this legislation”, seem to be referring to it as an active change – or an exception – to an implicit, assumed prohibition. That the government is now “allowing” people to carry guns into bars. I don’t care what your particular take on the issue is, if we don’t at least agree on that, we have much larger problems. We live in an (ostensibly) free society, with limitations on our conduct and actions placed on us by our government. But our starting point is “I can do whatever I want”. They’re not “allowing” anything – technically, they are rolling back an exception. Or, more accurately, making an exception to an exception. From the text of the bill:

As enacted, allows person with handgun carry permit to carry in restaurants that serve alcoholic beverages

The implication here, is that somewhere in our books is a law that had made it illegal, previously. (I don’t know what it is – any readers care to illuminate me?) So, right off the bat, I think it’s important to clarify that this legislation is only rolling back a specific prohibition. An exception to an exception. So, then, is it any surprise that there is already confusion on how to enforce the law?

According to a lawsuit heard for the first time yesterday, the guns-in-bars law is so vague that you can’t really know whether you can carry your weapon inside many places. Does this business earn most of its revenue from the sale of food or booze? That’s the question, but who can tell?

Indeed. You know who can probably tell best? The proprietors of individual establishments, in the course of making their own decisions about behaviour they do or do not allow on their premises.

It doesn’t take a psychic to determine the rather predictable libertarian response to this legislation: I don’t want it to be up to the government to decide where I can and cannot carry my gun. The only argument you could possibly make for why it needs to be the government making this decision is an overwhelming inability or unwillingness on behalf of private establishments to make that decision on their own. That argument falls on its face, however, with the overwhelming evidence of restaurants and bars that do, in fact, ban guns on their premises. And it falls on its face now that it’s enacted here, as establishments begin to ban them as well. Curiously, proponents of a bar/gun ban seem to be using this as evidence to support their cause (albeit sometimes incomprehensibly):

In protest of the first official day of guns-in-bars, Johnson City bar owner Dan Numan is issuing his patrons water pistols, according to the News Sentinel. The first 100 patrons get the free water pistols, which will be followed by a massive and ironic battle. For all the gun nuts out there who might sneer at Numan and the other bar owners who plan to screen patrons for weapons, isn’t this totally libertarian?

The guv’ment enacted a law allowing people to carry guns into places where, like it or not, fights break out. You might get punched, or something. Last thing these guys want is some wiener with hurt pride, pulling out a concealed weapon in anger. So they’re just deciding for themselves. Isn’t this what y’all want? The little guy deciding he’s not going to let the government tell him how to run his bar? That’s individual liberty. Are gun rights people cool with this kind of liberty exercising?

I assume there’s some attempt at sarcasm going on here, but I am not really sure what the author (Brantley Hargrove) was going for. Upon reading this, I was unable to formulate a more verbose response than “… yes?” That is, in fact, exactly the sort of liberty that gun rights people want to see exercised. To be fair, there are some gun rights proponents that are saying they will boycott these restaurants (or simply won’t be able to get in, because they’re strapped) – but this has to do with them exercising their right to patronize an establishment or not. They’re not boycotting these places in the hopes that the government will mandate that they can carry their gun in there, or something. (Or, if they are, they’re hopelessly hypocritical, and possibly insane).

But this is precisely what any reasonable “libertarian”-minded person wants: the government staying out of business that the private sector can manage just fine on their own, thank-you-very-much. The overwhelming argument against this move is “Guns and Alcohol Don’t Mix”. If that’s the case, then the government has nothing to worry about – establishments serving alcohol would be well-served to ban firearms. And indeed, that appears to be what they’re doing. So, what’s the problem?

Then there’s the actual, practical ramifications of this legislation. As with most politics, the debate of hypotheticals around the changes reaches histrionics of truly epic proportions. If I could paraphrase the gist of most of what I’ve read, it’s that if we allow guns in bars, it’s only a matter of time before a drunken firefight ensues – and worse, it’s never the gunslingers that pay, but instead an innocent bystander, usually a sweet innocent child. Now let’s consider the actual change and the practical implications – how would they yield such an outcome?

I’m sorry, but I’m not seeing the case for pants-wetting panic. There’s a lot of derisive head-shaking about how it’s sad that we have places now that are “forced” to have metal detectors now. But it’s not like Metro PD was somehow mysteriously preventing these people from bringing guns into a bar before. It was hard-to-enforce legislation that really just manifests in an extra charge in a gun violence crime. “The defendant is charged with first degree murder, and oh, also, you totally weren’t supposed to have that gun in there!!”

There’s also past precedent we can look at. Georgia enacted similar legislation last year, in the face of dire predictions of violence on an epic scale.. What happened since then? Nothing.

Lastly, to deflect the most puerile and irritating attack, which is probably the first one I’ll get: I’m not a “gun nut”. I’m not a Republican. I’m not a conservative. I’ve never owned a gun. I don’t own a gun now, and I have no particular interest in owning a gun. I also agree that guns and alcohol don’t mix. None of these positions is required to believe that private citizens are capable of making decisions on their own, or to see that this legislation will have very little real impact.

« whatever I did, I'm sorry whaaaat »