unclear on the concept 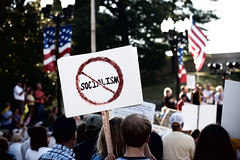 So, I went to the Tea Party Nation’s tea party thing at legislative plaza yesterday. These things tend to be a cornucopia of photographic opportunities – awesomeness and hilarity in general – regardless of the political persuasion. Obviously this particular segment of our political spectrum is not one that I have much in common with. In theory I am a libertarian, but not really of the same, er, strain as these folks. Anyways, so I went in with taking pictures in mind – the various speeches, which were almost entirely pointless rhetoric comparing Obama to King George (what?) and such. But during the last speech, I was up front taking pics, and I heard him start to talk about “calling in conservative” – basically they were suggesting they pick a day on which everyone calls in sick (“call in conservative”), to get their voices heard. Obviously, my ears picked up at this – I mean, I’d spent the last hour wandering around a crowd with anti-socialism signs. Did my ears deceive me? Did he really just call for a general strike? I turned to the people behind me and said, incredulously, “did he just call for a general strike?” “I think so,” the guy chuckled. Shortly after, I shouted “YOU SHOULD FORM A UNION!!” .. didn’t go over well.

So yeah. What? The libertarian pro-capitalist anti-leftist right-wing contingent is calling for a general strike. Surely I’m not the only one to see the irony in them adopting wholesale a leftist organizational tactic. I thought I must have misheard, so when I got home I went to their website – sure enough, it’s right there on the front page:

The mind reels. Political rallies: good for photographs, and also for massive cognitive dissonance. Rest of the pics are here.