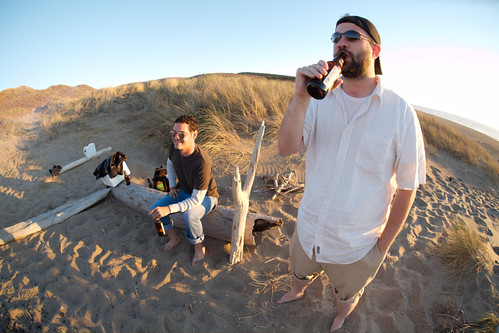 I left my heart lens cap in San Francisco.

I finally took a vacation. I’ve given up hopes the last couple of years of finding time to do the “lay in the surf like a beached whale” beach trip, so I’ve instead been trying to work days off strategically around weekends to visit friends over yonder. This last weekend: SF. And now for no real reason other than rubbing your nose in it, a brief recap of my trip:

Thursday: flew in late, met my friend Chris and Melissa for microbrew beer and pizza at some place in Berkeley that had a really good Pilsner. We then headed to a bar called the Albatross that was cozy.. Looked like a good romantic date location. You know, if you’re into that sort of thing. 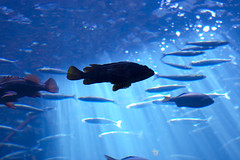 On Friday, we woke up early and grabbed bagel sandwiches and walked around some piers looking at boats. Spent some time drooling at this boat and a few others that were docked for fleet week. One of the others was named “In Ocean” – proof that people buying yachts are still not of the generation that would consider the googleability of their yacht’s name. Go ahead, try to find info about their boat, I dare you. I don’t know a lot about boats, but it’s pretty easy to spot the Really Nice Ones. They tend to have lots of polished surfaces, and lots of unusually good-looking people on deck polishing them. We asked if they were there for fleet week, but no, just cruising on a trip from Alaska to Hawaii and a few other places, they just happened to be there. Ah, to be rich.

After a brief sojourn checkin’ out some science at the California Academy of Sciences, we headed to dinner at Sotto Mare, where we had risotto, cioppino, and sea scallops. One of the better Italian meals I’ve ever had. Followed up with drinks at 15 Romolo, which is run by a friend-of-friends who bartends there, and makes some of the best drinks I’ve had in a while. 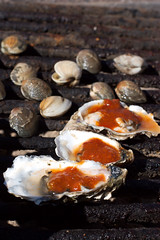 Saturday started off with dim sum at Pearl City in chinatown, which was excellent, and I somehow managed to not totally stuff myself. Then walked up north to the shore to watch fleet week craziness, and then had a few beers at a place near the Presidio. Always weird to be drinking beer while hearing and seeing F16s randomly fly by. I imagine that’s pretty much what I’ll be doing whenever World War III erupts (vote mccain ‘08!!!). Wandered around in the presidio to a national cemetery and then a cool pet cemetery, and then walked all the way back, since fleet week traffic made mass transit pointless. Probably around 7 miles of walking altogether. Dinner was fancy french food at Le Charm. Pretty delicious – started with mussels and pate maison (i think?) and I had the bouillabaisse, which was excellent.

Sunday was what I was really looking forward to, and it didn’t disappoint. Early morning we rendezvoused and all drove up north to a place called Hog Island, where we proceeded to stuff ourselves silly with Oysters. I think we went through near a even gross of Oysters and a few dozen clams, complemented with sopresseta, brie, crackers, champagne and Belgian beer that we brought. Total cost per person? $15. Yep.

After we were done eating, we drove north to a place near Point Reyes, where we went to a slightly hidden area with a firepit and hung out by the beach for the sunset drinking beer and eating hot dogs (because a dozen dozen oysters just really isn’t enough).

Had a leisurely drive back, dropped Chris off in the east bay, just in time to notice on the way back that Angel Island was on fire. I of course took picture after picture, despite the people in the car falling asleep waiting on me. 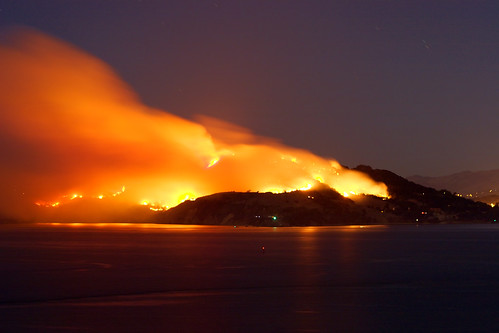 « oh yeah you're gonna hear me on your radio »