on matters of steak 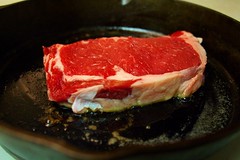 How not to fry a steak.

So, I've been eating a lot of steak lately. One of the benefits of my bachelordom is that I can have bourbon and steak for dinner and not get yelled at. So, people love to grill steak, and for good reason. It's tasty. Charcoal flavor is nice. But being the fancy-lad downtown-living metrosexual that I am, I don't exactly have the requisite equipment to grill a steak -- namely, a patio. Or a grill. So, I pan-fry. The very idea used to disgust me, but I've come 'round to the pan-fried steak. And I've mastered the art of it, if I do say so myself. The picture at right demonstrates my early on in my attempts to pan-fry. I just slapped it in the pan and hoped for the best. The fresh, pretty red color on black makes for a nice picture, but not a very good meal. More on that below.

This is not a complicated process, but it works for me, and it's fairly tailored to my preferences. I like steak very rare, but I've never been a big fan of cold meat. I like my steak as rare as possible while still warm in the middle, basically. (This depends on the quality of the meat, though -- I'm not as picky about this with filet mignon, for example.) So, to accomplish this, I do a few things. First, regarding meat selection. My preference is for a thick cut, an inch to an inch and a half. I usually target 16oz. steaks, as this is more than enough for me when I'm starving, and a decent size for two people. Preferrably strip or ribeye. This process works for either. Typically, I let the meat come down to room temperature on the counter, while I busy myself with other important things, such as tweezing my eyebrows.

Once the meat reaches room temp (or when I get too hungry to wait any longer), I cut the meat in half, salt/pepper it liberally and put it in a nonstick baking pan with sides. Preheat the oven to around 175-200 degrees and stick it in. I have no specific time that I keep the meat in the oven, and it largely depends on the thickness and size of the steak. The idea is basically to bring the meat up to serving temperature throughout, and cook the outside a bit. I basically eye-ball it and rely on smell -- with a ribeye, my kitchen will start to smell like prime rib when it's more or less there. This takes some experience to get right. Too long and you run the risk of overcooking it, or at least drying it out. So, it may take some experimentation. It's probably the hardest part -- as much as eating steak every night while you learn can be described as "hard".

At this point, I get out my one, my only, my constant -- my true love. My skillet. It's time to sear the meat. Bring the skillet to a fairly high temperature as high as it will go. It will be scary. You'll be afraid that your smoke alarm will go off, or that you'll actually burn down your house. If you're not afraid of this, it's not hot enough. Dump butter in, and wait for the water content to boil off and the pan to start smoking. The only thing we're doing here is searing the meat. It's already cooked to our satisfaction. The goal here is two-fold: general browning, and the all-important Maillard Reaction. This is a complex reaction that involves chemicals and ... stuff -- specifically amino acids and sugar. The result is that elusive Umami -- aka "the taste that everyone forgets about". This reaction doesn't happen at all without sugar, though, so that's why the butter (lactose) is important. It also requires high temperature and low moisture levels, so make sure to pat the meat dry before searing. So anyways, sear the meat on all sides -- I like to use tongs to allow for better management of the meat, and so I can sear the meat on the sides, as well. Once seared to your satisfaction, remove it from the heat, set aside and let it cool. Meat will continue to cook after heat is removed, of course, so make sure you let it stand for a while and also take this into account while you're searing. While it's cooling, you can prepare your other sides, or whatever. I've read some articles in Cook's Illustrated that recommend finishing it in the oven, but I haven't found that to be necessary.

It's tough to get good results by just slapping cold meat in a pan (as I had previously) -- if the skillet is too hot, you get seared meat but ice-cold inside. Conversely, if it's too cold, it takes approximately forever to cook, and the meat gets dried out (and probably burned rather than browned, on the outside.). It's a lose-lose situation. The result with this technique (when done right) is a nicely seared outside, with that savory bit of buttery brown crust we all love so much, and nicely warmed, moist, rare meat on the inside.