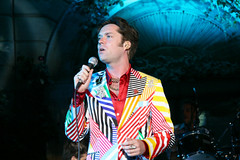 I did not take this picture, this guy did

Just got back from seeing Rufus Wainwright play at the Ryman. Is it still called a man-crush if the guy you have a man-crush on is actually gay? Or does it then just go back to being a regular crush.

Anyways, this show was unbelievably amazing – definitely rivaling the David Byrne show I saw there, perhaps topping it. No pictures, because, no fancy-pants cameras allowed. He came out with the band decked out in these vaguely flag-themed suits, with an american flag mockup background, which he explained was his own representation of the american flag: the black/white stripes representing all the bad, and the brooches as stars representing all the good. Given all that, it’s probably unsurprising that he opened with “Going to a Town” – a song which isn’t exactly rah-rah America. Afterwards, he commented “hey, only in America could I sing a song like that here and get away with it.” True enough..

Other highlights included a quick break for a costume change into lederhosen, a few songs, and then two kick-ass Judy Garland songs with piano accompaniment. Encore finale was “Come on get happy” with an entire dance routine performed by … his band. His band, who then got right back up and closed with Gay Messiah. Fuckin’ A.

Sorry for the play-by-play. It was awesome. I’m goin to bed.