I lost my virginity last night. Popped my cherry. I went to Prince’s hot chicken, finally. We got there fairly early, 7:45ish on a Friday night, and there was already a line – I seriously can’t imagine what it’s like there at 3AM on a friday or saturday night. Anyways, the order:

I didn’t seriously expect to eat an entire half-chicken, but if you’re gonna get fried chicken, you may as well have leftovers. I didn’t get extra hot, because I’m adventurous, not stupid. Aaron got medium, and Claire got mild. Daniel hung tough with me and the hot. We got our food and split for Daniel’s place down the road, stopping for a 6-pack of Miller High Life (because nothing washes down excrutiatingly hot food like a watery, carbonated beverage, right?).

Now, let me just say up front that I am not generally a fan of hot purely for hot’s sake. Prince’s is a little of that, but not entirely. Underneath the crust of pain, there lies some pretty decent fried chicken. But it is hot, oh yes. I’ve never been one to beat around the bush (I don’t ease into cold water, for example – I’m a jumper), so I plunged in face-first with a giant bite. I learned a lesson right there.. After that, I was like a beat dog, circling the chicken cautiously, afraid to be too greedy or careless, picking small pieces here and there, lest I be reprimanded again by my master. After a good 10 minutes of silent sweating and crying, Daniel pipes up, “Oh look! a pickle!”, and then later, “Oh that’s right, I got beans!” Daniel, you can’t avoid the chicken forever. Stop pussyfootin around and eat it. The white bread is an interesting touch – after it sits underneath all that chicken, soaking up the grease and pepper, it becomes sortof a dish unto itself, and a surprising source of heat itself. (Yes, bread soaking in pepper-infused oil is actually hot – who knew?) Any time you actually bother to bag up white bread for leftovers, you know you’re dealing with an interesting meal. 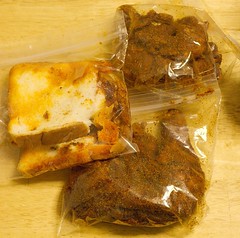 The cole slaw went down quickly – an early but ultimately futile attempt to stave off the heat. I’ve never drank so much beer so quickly (those of you that know me know that this is a lie, but indulge me for the sake of the story). Eventually, the endorphins kicked in and I hit a nice groove, using the ranch dressing as a crutch to balance out the heat of each bite of the rest. 30 minutes later, I was done … with one piece. And then, when I thought I was through, I made the rookie mistake of rubbing my eye, if only with the back of my hand. Painful, but not too bad .. I’ve done far worse after cutting up chiles at home.

I still have the leftovers in my fridge. When I woke up this morning, I could already hear a little voice in my head: “eat it. eeeaaaaat it. eat it for BREAKFAST!!” Fortunately my stomach is louder than my endorphin-fueled demons, and it piped up with a noise that could only be interpreted as “fuuuuuck no”.

So, that said, what do I think of the chicken itself? It’s good. It’s hot. There’s a lot of grand talk about their 50-year old secret family recipe, but I’ve never really been one for mysticism. As far as I can tell, it’s just paprika, a whole hell of a lot of pepper (Daniel guessed cayenne, but I have no idea.), oil and maybe some sugar. It didn’t strike me as a masterful work of culinary art – it’s just freaking hot as hell.

Anyways, I am gonna go eat some leftovers. I’ll catch y’all on the other side.

« release the stars (and others) anniversary »