I have never been so excited about a phone before. The Motofone F3 is set to be released .. soon. They said Q4 of 2006, but so far only India has gotten it. What’s so special about this phone? 40G hard drive? Built-in iPod? A web browser? Groupware support? A bluetooth garagedoor opener and can opener? No, no, and no. It has none of that. Nothing. It’s a phone. Period.

For years the cellphone industry has been catering to the convergent market – i.e. promising more and more functionality in their phones to broaden the appeal to more and more people. The downside of this appeal is that it leaves out the market in the “third world” – people that don’t need mp3 players. They just need a phone. But while this opens up huge markets in poorer countries investing hugely in wireless infrastructure, I think it will also open a market right here in the U.S. People like me. 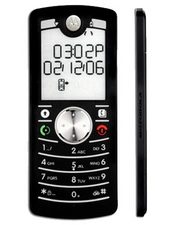 It’s 9mm thick, 68g including the battery. 400 hours of standby, 4.5 hours of talk time. The display is EPD (electronic paper), which apparently makes it very visible, even in direct sunlight. How much for all this dazzling technology? $200? $300? Wouldn’t be out of line with most super-awesome modern phones, right? Try $50.

I am pumped. The only downside I see is that it apparently lacks a backlight, which may make it difficult to see in complete darkness (though the EPD is apparently very good even in low light).

« how to cheat at cooking dream »