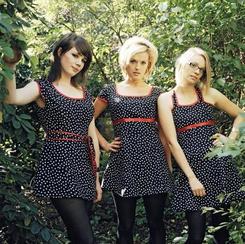 Amanda has the most amazingly uncanny ability to find awesome music. It just comes naturally to her, I guess. She’s been digging on this song by a band called The Pipettes (pronounced with a short ‘i’, evidently. They are not female pipes) for the past couple of weeks, during which I was pretty much oblivious or dismissive. Then she grabbed the album, We Are the Pipettes via emusic, and I finally got around to listening to it. It’s pretty amazing. It was annoying at first, but now I can’t get it out of my brain.

The Pipettes are basically one of those pre-fab bands, or something – the result of an idea that someone had, where they put the band together around it, rather than a group of people deciding to just make music. Not that there’s anything wrong with that. The idea is 60’s girl pop rock, complete with the polka-dots and hand-dancing and 60’s hairdo’s. It’s a bit obnoxious, really, and I am not sure I could stomach it, visually, sitting through an entire show of theirs – they lay it all on a bit thick. Okay, we get it, you’re retro. Uh, anyways, where was I..

Oh right.. The music. It rocks. It’s awesome – this album would stand well on its own with or without the retro 60’s kitsch. Apparently it’s these 3 girls singing and a backing band (called “The Cassettes”). No word on who actually writes the songs, but they are dope. My favorites are “Pull Shapes”, which is probably the most modern of all their tracks, with a sortof Cheerleader-chant-ish vibe that reminds me of Supersystem a little. “Judy” is a nice little ditty with lots of lush harmonies. “A Winter’s Sky” is this sortof depressing, slow song, that sortof reminds me of Duran Duran’s “Winter Marches On”, which also has the word “Winter” in it – coincidence? Probably.

[http://www.place.org/~cwage/sounds/Pipettes_A_Winter_s_Sky.mp3] (The Pipettes - A Winter’s Sky)

Lastly, there’s this song that is sortof a punchy Beach Boys-ish song.. except it’s a rather depressing tour of, well, a pretty bad relationship – called, appropriately, “Sex”. Lyrics transcribed by yours truly:

You know I’m all for conversation
I’m really quite a romantic, you know
But why not get right to the point
It’s not that often we’re left alone
No offense but when you get going, you really can be quite a bore
Now please don’t take this the wrong way, but my ears are getting sore

We spent a winter and a spring, just listening not talking
Come rain or wind or shine
And no, I never told you that the conversations in my head helped me to pass the time

Now while I like this song a lot, and think it’s not only catchy, but well-written, it’s also a bit manipulative. It reminds me of any movie where there’s a drop-dead gorgeous chick who is “just treated awful by her jerk of a boyfriend and boy if i ever had a girl like that i would NEVER treat her like that!!!!” I used to watch a lot of these movies on USA when I was 14. Anwyays, this song is sorta like that, since it doesn’t hurt that the chicks singing are not bad to look at. Gosh, her boyfriend sure was a dick. I would never treat you Pipettes like that! They’re playing me for a sap. But I like it.