Amanda and I have made somewhat of a tradition of going out to Cheekwood every Memorial Day to celebrate our anniversary. We usually meander through the gardens, enjoying the sun, suffering the heat, and taking in the glorious smell of a well-manicured garden. This year we took a slight detour down the “woodland sculpture” trail, which we had never really explored before, because it starts off with some pretty boring metalwork stuff. But the trail is a lot longer than we realized, and we made some .. interesting discoveries.

Among them was a giant bunny I spotted in the distance. “Cool, a giant bunny”, I thought. So, we went to check it out, and when we arrived: 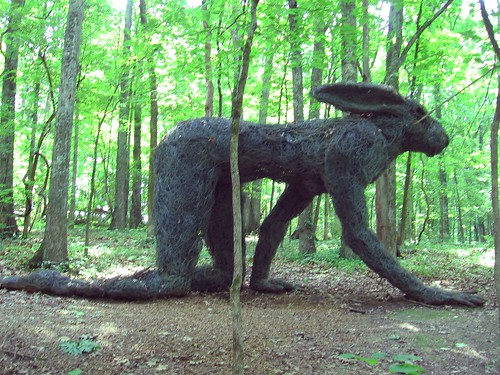 “Oh, a giant bunny woman. Cool.”, we thought. Then we meandered around to the other end: 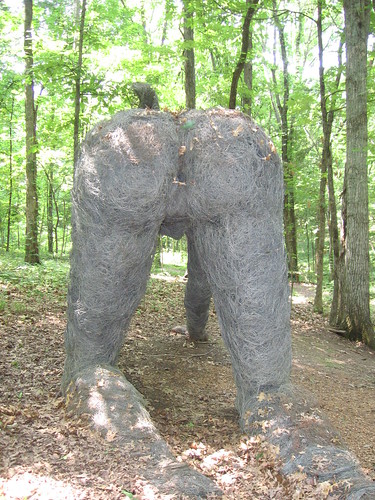 “Oh, a giant .. bunny woman .. vagina. Cool?”, we thought. Apparently it’s the work of Sophie Ryder. It’s a neat piece, but I can’t shake the association with the obvious problem with a half-bunny half-woman with well-defined genitals and breasts. Amanda thinks that this piece and the half-spaniel half-women sculptures out front are evidence that the Cheekwood’s art director is a furry. Maybe so. Either way, I am surprised that a fairly family-oriented place in Nashville would allow the display of genitals, even if sculpted from wire. I think it’s awesome, myself.

Then, we encountered this, which I think is amazing: 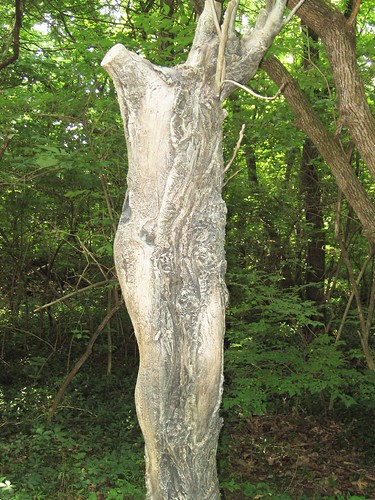 I bet that 95% of the patrons of the park walk right by this piece without even realizing it’s there. The thought process we encountered was:

“Wait.. that can’t be natural – it’s too uncanny. This was clearly carved. Man, how did they carve a figure of Jesus Christ in a tree, while allowing the bark to continue to grow around it without killing it!”

It’s around this point that logic kicks in, and Amanda knocked on it: “Oh. It’s Bronze”

It’s a beautifully subtle work of art. I love it.