I had a weird dream last night that involved losing teeth. Lots of teeth. I mean, I was spitting out fragments of shattered, rotten teeth and pulling them out of my gums for hours. Well, dream-hours. While I’d like to think that, as the old wives say, I’d be coming into a lot of money soon, I think it probably has more to do with the fact that I haven’t been to a dentist in over a decade. But now I realize it was probably preparing me for this post by Tyler at Marginal Revolution. He links to the Forbes list of the 20 most important tools. One of his suggestions:

Maybe “the stone” is not sufficiently handmade, but how else did they cut umbilical cords?

Tyler is forgetting a particularly useful tool, but it was one created not by human ingenuity but simply by evolution: teeth. Most primates and indeed most mammals in general simply bite the umbilical cord to sever it and consume the placenta (placentophagy).

I talked to my mom about this, and she also relayed the idea of a popular new thing called a “lotus birth” (and she was very clear that she doesn’t endorse it, of course), wherein the umbilical cord is not clamped and severed. Instead, the placenta is allowed to remain connected until it necroses. The justification is that before we invented knives (or sharp rocks), this was the only option, so this is the “natural” way. I guess this was before we evolved teeth, too. 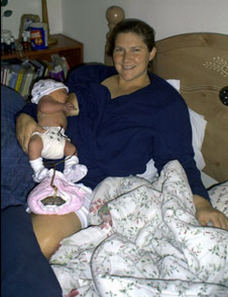 Yes, that’s the placenta. In a diaper. Huggies, I think. Which brings me to the funniest part from the wikipedia article:

A special cloth bag or a cloth diaper, called a placenta cloth, may be used to contain the placenta. The cloth used to wrap the placenta must allow air through, so that the placenta can dry out. The placenta is first thoroughly rinsed and then treated by having salt rubbed into it. Sometimes scented oils, such as lavender, are also applied to mask any unpleasant odors.

Apparently we invented yarn-spinning, weaving, and the oil-press before we invented the sharp rock, as well. I am not sure where Huggies fit on that timeline.

All joking aside, this has to be one of the stupidest things I’ve ever seen.