I love the history of cities. Cities are continuously evolving, being torn down and rebuilt over and over again. You never know when you’re sitting right on top of something completely unlike what’s there now.

I was browsing around tonight and found this thread that has a picture from Nashville flooded badly in 1937: 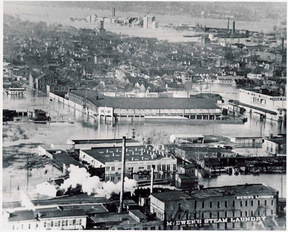 This picture amazes me mostly because I don’t recognize anything in it, and I only live a few blocks away! Well, except smack in the center, which I do know is the old Sulphur Dell baseball park, so I know that’s 4th and 5th on its borders, but everything else is foreign. Much of it was probably wiped out in the very flood captured in that picture. The density of the residential neighborhood is amazing – a far cry from what the area is like now. I hope the construction of the Veridian and projects in the Gulch will help revitalize downtown and reintroduce some element of community back into it that it’s sorely needed for so long.