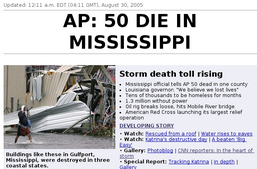 Okay, what the hell? What is with the fuckin 150pt font? Why don’t they just go ahead and add “YESSS!! FINALLY, SOME DEAD PEOPLE!!!”

I have kept my eye on CNN this entire time, as you’ve probably noticed, as I keep posting the various things that disgust me. Why do I keep going back? I don’t know. Why are people entranced by car wrecks? But I think it’s interesting to note that none of the mainstream media sites really provided me with a single ounce of worthwhile or timely information.

Most everything I learned as this unfolded: how many people were holed up in the Superdome, how much water was on the ground in the quarter, what the wind was like – it all came from blogs. I am not exactly a super-hey-hey-blogs-are-revolutionary type guy, but that’s an impressive change, I think. The only reason I kept checking CNN et al was to see how long it took them to pick up the things I already knew from reading various blogs. The funniest thing, to me, though, is Miles O’Brien’s “hurricane blog” – which I notice now has finally been removed from the front page. It is the most pathetic thing ever. My favorite entry is the one from this morning:

Katrina is arriving in Baton Rouge. The wind and rain are picking up significantly.

Wow! Thanks, Miles! And then there’s this gem, later:

When it was all over, LSU Chancellor (and former NASA boss) Sean O’Keefe led us to a campus cafeteria for some breakfast. After arising at 2 a.m. CT and working until 9 a.m. in the driving rain – I found the school fare pretty darn close to perfection. I guess they have improved institutional food since my college days – or maybe my standards were a little lower this morning.

I bet CNN is really glad that they dispatched Miles to Baton Rouge so that we could all get a first-hand glimpse at LSU’s cafeteria. Do I smell Pulitzer here? Mmm? I think so!