I find this “smoking man” non-story to be interesting: 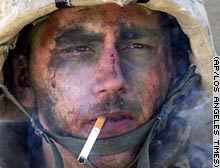 In the photo, taken after more than 12 hours of nearly non-stop deadly combat, Miller’s camouflage war paint is smudged. He sports a nick on his nose. His helmet and chinstrap frame a weary expression that seems to convey the timeless fatigue of battle. And there is the cigarette, drooping from the right side of his mouth in a manner Humphrey Bogart or John Wayne would have appreciated.

The image has quickly moved into the realm of the iconic.

The Los Angeles Times and other publications have received scores of e-mail messages asking about this mysterious figure. Many women, in particular, have inquired about how to contact him.

“The photo captures his weariness, yet his eyes hold the spirit of the hunter and the hunted,” wrote one admirer in an e-mail message. “His gaze is warm but deadly. I want to send a letter.”

I’m sure hundreds of thousands of photos of soldiers have been snapped since the beginning of this war, yet this one is now “iconic”. Why?

Let’s face it – Americans love us some war. We romanticize it in a way that hearkens back to our (perceived) unilateral, romantic glory in the two world wars. And this picture is a great example of that romantic fetish – this picture could have as easily come from Iwo Jima. The smudged face, the blood, the tired-but-tough expression, and of course the “humphrey bogart” cigarette hanging from his lips. It’s everything we love about war heroes, right out of the movies.

It makes for a much more appealing icon than some of the alternatives of the less-popular face of the war, such as babies losing legs and kids barely out of high school getting killed, or any one of the 10,000 to 100,000 civilians killed, etc. No, better to focus on the rugged face of American individualism. I also love how we are quick to admire his “weary expression that seems to convey the timeless fatigue of battle”, but never giving much thought to how we could, you know, avoid battles.