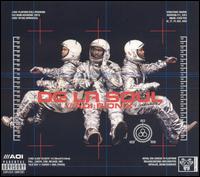 You know, what irks me about every review I’ve read so far of this album is that it compares it to the likes of Three Feet High & Rising, or De La Soul is Dead, as if Stakes Is High never existed.

So, before I get into this new album, I’m gonna use this review to rant a little about Stakes Is High.

Stakes Is High seems to be largely ignored by critics, these days, and sometimes even by De La Soul fans. (www.allmusic.com gives it like a 2.5 out of 5 stars?!?) But I love it. It’s the album that made me love hiphop again. And I know I’ll probably catch a lot of flak for this one, but I think it was one of the more revolutionary albums of the decade. The year was ‘96, and in the face of a 2pac crazed generation, they picked up the fizzled-out remnants of the Tribe Called Quest-led movement we all knew and loved and took it a step further.. They made something a little more honest, serious, and composed.. A little more grown-up.

Anyways, that said, I don’t know why people bother comparing this album to Three Feet High and Rising, because the real benchmark is Stakes Is High.

AOI: Bionix is the second installment of De La Soul’s much-anticipated and perhaps overly-prolonged comeback. While I think the first installment, Mosaic Thump, was overproduced and underinspired, this album has a much more fun and enjoyable feel to it. It flows. It bodes well for the future of these hip-hop veterans.

It’s hard for me to put my finger on what it is, but this record has a little more of the heart and soul that was in Stakes Is High, but seemed to be missing from the first AOI.

My favorite tracks are some of the first ones.. “Baby Phat” and “Simply” both have solid, fun grooves. They’re definitely not shy about making dance-able tracks (a trend that Jungle Brothers have since practically made their MO). These songs make you wanna dance – or if you’re shy (or too cool), you wanna at least nod your head.

I’m not sure what to think of the “Peer Pressure” track (which features Cypress Hill’s B-Real in a post-church weed-smoking peer pressure dialogue). At first listen it seems maybe a little trite, but De La is definitely known for occasionally throwing out there some pretty subtle (and some not so subtle) facetiousness. (see “Kicked Out of the House” on De La Soul Is Dead).

Anyways, all in all, it’s very listenable. Where I found myself getting rapidly tired of AOI: Mosaic Thump, I find myself putting this record on repeat.

While I don’t think it’s as jaw-droppingly lovable as Stakes Is High, it’s indicative at least that these guys aren’t stagnating, and are definitely maturing and evolving their sound.

« It's been a while since I have been screwing around »