LP Field: we should demolish it because of how it sucks and is terrible 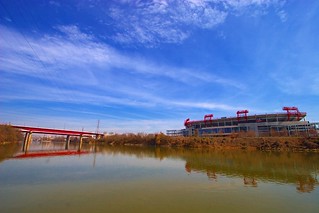 LP Field. I've said it before. I'll say it again here, so it's on the record. The construction of LP Field on the east bank will go down in our city's history as the worst thing that ever happened to its urban development. Aside from being hideous to look upon, this monstrosity occupies the entire east bank of the river -- urban space that could be put to any number of fantastic uses to develop and improve the downtown community. Instead, it sits empty most of the week, and it puts a stranglehold on connectivity between the two sides of the city -- an annoyance for the most part, an infuriating clusterfuck on gameday. I won't pretend to be an expert on the places it could have potentially gone, but I'd be hard-pressed to think of a location worse than where it ended up.

Now that the Titans are doing poorly, I vote we seize the moment and tear it down.

« when NPR gets unlistenably stupid: a sentence that hayek wrote »