a primer on proper coffee snobbery 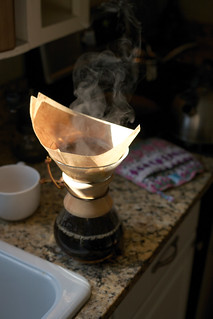 UPDATE: So, while I still believe most everything I wrote here to be true, I will say that I recently did a side-by-side comparison of some of the coffee that I roasted: one cup from a pot I made in the Chemex, and one cup made with the Keurig. The Chemex coffee was unmistakably better, and the Keurig coffee tasted like ass. So apparently the Keurig method (despite its relative simplicity) does still have its faults. If I were to guess, I’d say the water is too hot, the steep time is too short, and the cups allow for too much sediment. Not undrinkable, but not great. So there’s that. I maintain that the coffee is the most important variable, but apparently the Keurig is a little worse than I gave it credit for. At least I TRIED to be even-handed!

Yesterday, someone asked me about my Chemex coffeemaker. Whether or not I liked it, how it works, etc. In the course of this and other such conversations, I’ve realized how much gravity (and baseless snobbery) people put into their coffee maker, while giving little (if any) thought to the coffee they put in it, which is easily the most important part. Coffee brewing, when you get right down to it, is not that complicated: pour hot (195-205F) water over ground coffee beans. There are legitimate subtleties, of course, but by and large it’s not a complicated process. So, while I like my Chemex, I hold no illusions that there’s anything magical about it: it’s a carafe with a thing on the top to hold a coffee filter. I am not sure the Clever coffee dripper thing was around when I bought it, but had I been aware of it, I probably would have considered something like that instead. The Chemex works fine, though, and it looks pretty. I like pretty things.

This is also why I have no snobby objections to the Keurig brewers in theory – they are also just another method for pouring hot water over coffee grounds. (I have heard that the default Keurig water temperature is a bit too hot, but that it can be adjusted.) The real problem with the Keurig machines is that 100% of the K-cups I’ve tried for it taste like dirt mixed with bird droppings. Seriously, if you own one of these machines, do yourself a favor and buy some of these, and never use those shitty K-cups again. The coffee is awful, and they’re bad for the environment and stuff.

So, if you find yourself angsting about what coffee maker to get, don’t sweat it. A freakin drip machine does a fine job of making coffee (albeit they are prone to mineral deposits/gunk/funk that’s hard to clean). If you’re going to exert energy in pursuit of coffee snobbery, shift it away from the coffee maker and back towards the coffee.

Which brings me to a second common source of misplaced snobbery when it comes to coffee: roasters. Roasting vendors, that is. “Micro”/local coffee roasters have sprung up all over, lately, You’ll hear a lot of people proclaim loyalty to one coffee vendor or another, heaping effusive praise on the merits of this or that roast/blend. Many (most, even) of them do a fine job, however, in my experience over the years, consistency and reliability fluctuate wildly. Lots of these vendors rise from hobbyists that had a knack for roasting and started marketing and growing like crazy. Starting a business is hard, and ensuring consistency and reliability in the face of such growth is tough. There was a time when Portland Brew’s coffee was some of the best you could get, around here. Skip forward a few years of their own growth (pains and all), and .. well, not so much. I remember a specific moment when I was drinking some of their coffee I had bought and realized that, basically, it was terrible. And then I realized I had just bought it at the coffee shop where it was sitting by itself, lonesome, in a prepacked bag on a shelf – for who knows how long. And that there was no real evidence of any recent roasting activity at the coffee shop at all. I was drinking old coffee. Oops. 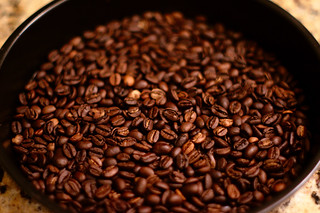 But I digress. My point is not to disparage local roasters having a go at making a business out of roasting. It’s to emphasize that, again, by and large, the biggest discriminator between “good” and “bad” coffee is not who’s doing the roasting: it’s the source of the beans and how fresh they are. My suggestion? Roast your own. It sounds daunting, but I assure you, it’s not. It’s trivial, even. I started doing it around a year ago, and it’s been the single best (coffee-related) decision I’ve ever made – and it made me realize how truly bad much of the coffee I had been drinking really was. Certainly there are roasters that do a much better job of roasting and blending than I do. But I do a job that is good enough, consistent, and reliable (and cheap!).

Someone at Barcamp in a few weeks is giving a session on roasting your own coffee with a popcorn popper, which is the method I use. I initially joked that it seemed like the entire session was in the name: “step 1: roast your own coffee with a popcorn popper. step 2: there is no step 2”. But I do think it’ll actually be an informative session – so if you’re interested, check it out. At the very least, I’m guessing there will be some tasty coffee.

There’s a world of opportunity for snobbery (er .. connoisseurship) with regards to coffee, but don’t get distracted by irrelevant details. Coffee at its core is pretty simple: quality beans + recent roasting + hot water = good coffee. Start there.