a portrait of an absurd friend 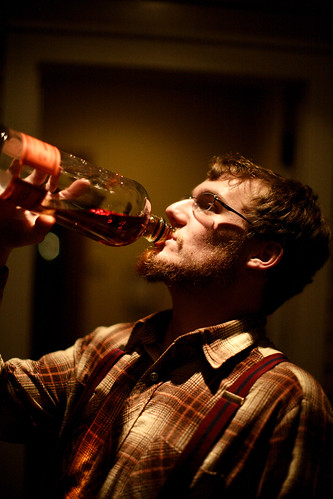 Note #1: I fucking hate the Doors. But I had the above song stuck in my head all day yesterday. I have no idea if Karsten liked it or not, but it always reminded me of him.

Note #2: I hate writing about loss, and grief. I thought about just posting a bunch of photos, but that's easy, and it's lazy. I know I won't feel better until I write about it.

Note #3: The above photo is not a picture of Karsten Soltauer. But it is a portrait of him, in a way. It's a complete stranger at a party -- one of many that he was enticing to chug from a bottle of Bulleit (of course) whiskey we had brought. Lest I paint his portrait as that of a mere drunken enabler, let me reassure you that his goal was that of the instigator, for the sake of sheer absurdity and the ensuing fun. And we had a lot, that night. Fun, that is. Bourbon, too, no doubt. He had a way of enabling fun. I had brought a date along with me, that night. It didn't work out between us, but she was enamored with Karsten, and he with her. He was crushed when I told him it didn't work out, as he often was after the termination of every brief relationship during my dalliance with single-mandom. He saw things in people that other people didn't look for or care to see, and was quick to form fond opinions of people, one way or another. Sometimes I think my breakups were harder on him than they were on me.

"Were you close?" The question you get asked most when someone you know dies. The question that made me choke up when I was asked on Monday. I've never been good at answering that question. I've never been good at bucketing relationships. How close are any of us? How well do I really know any of my friends? With Karsten, it was even harder to know, for sure, or to describe to someone else. Most people I work with seemed surprised I knew him at all, or closely at any rate. Kate and Karsten both were there for me during a (relatively) darker time in my life when I needed friends most. I hadn't known him as long as many, or as intensely. But through a turbulent (for me) couple of years, we became friends, and wound up spending many a night sipping whiskey and talking long into the night. About anything -- everything: art, music, philosophy, the Meaning of It All. Karsten had a uniquely charming sort of nihilism about him that manifested, ironically, in a sort of intense curiosity. He was one of the few in this world that had not lost the art of conversation. When you spoke with him, you knew he was listening and not just waiting for his turn to talk. When he asked you a question it was because he genuinely wanted to know the answer. He listened. Whether it was about my stupid, chaotic love life, the foundations of individualist anarchist/mutualism, his art, my photography, whatever -- he listened. Lurking beneath the surface of these talks was always the question "why?" No one I know had a keener sense of the absurdity of our existence on this rock, and no one I know had more curiosity about it. He'd ask questions with a wry grin/smirk that seemed designed to elicit a response, or to put you out of your comfort zone. Sometimes I think he did it on purpose, but most of the time I think it was just because he genuinely wanted to know the answer. Probably a little of both. For an artist, he had a beautifully scientific mind. Most of the good ones do.

How close were we? I have no idea. We were close in our own weird little way -- and I think Karsten was that way with many. "Who's that weird guy with the blue soul-patch?", I'd get asked at just about every mixer. "That's Karsten," I'd reply. "He's awesome." Any further defense wasn't necessary. I don't think he'd take any offense at being called "weird". He embraced it. He was weird, and he was awesome. And if they got the chance and took the time to talk to him, they'd learn this for themselves. Many people were closer to him, and know him better than I. But we were close enough. "Close enough", in fact, was the answer I managed to choke out. Close enough.

He hated having his photo taken (resulting in many successful dodges, and more than one Johnny Cash moment), but he was one of my favorite subjects. He complained about getting his good side. If he had a bad side, I never figured out which one it was.

He was my friend, and he was a good friend -- often a better friend to me than I was to him. I'll genuinely miss spending time with him. He was a talented artist and a great man. He will be sorely missed.

« on connoisseurship daniel tosh still not funny, news at 11 »