A few things by way of a followup to this post: 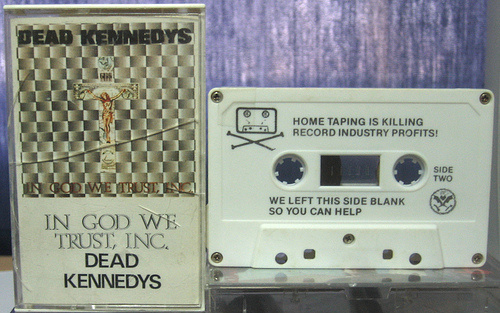 Many of you have seen this, I’m sure. Some of you may even remember it. But, lest we think sharing music is a new thing (or a problem), see above. Yes, it’s real. It was the B side from In God We Trust, Inc. This is a good segue into this post, which is pretty funny. Sharing music is nothing new. In fact, sharing music is pretty awesome, and in general, historically, it’s been pretty good for the artist in question.

I am annoyed, though, at how even this mostly-supportive article half-apologizes:

Furthermore, let’s get one thing straight–it’s not cool when artists don’t get compensated for their work.

and then still misrepresents her position:

She notes with some wonder that she really hasn’t bought much of it. Kazaa; Spotify; mix CDs; ripping music from her college radio station’s library of CDs; legal; illegal; subscription model services; gifts from friends; everything except… buying The Thing and owning it.

That’s not true, actually. She said she doesn’t buy CDs. She admits to some piracy, but mentions streaming and the size of her iTunes library. She never really gets into proportions – they’re left as an exercise of assumption for the reader. I don’t know why people seem to be having such a hard time with this. Her essay is stating in the simplest terms possible how an entire generation consumes music and it’s like suddenly people can’t fucking read.

If you carefully read her essay, it’s nothing but a rather remarkably impeccable assemblage of facts about her habits. There’s actually very little opining in it. And yet, the many and varied responses – both pro and con – seem to have assumed an admission of guilt, and a tone of casual immorality. Which is bullshit. They also all seem to have this “bless your heart, aren’t you cute” attitude. I think part of it is projection – that many of the readers cannot wrap their brain around a world in which a 21 year old has never really bought any CDs, and so they assume facetiousness, or disingenuity. Or they’re assuming she’s just stupid. I don’t know. I think it’d be reasonable to assume there’s a healthy dose of misogyny along with the ageism. Or whatever-ism. Part of it may be her own fault. If I were her, or her editor, I would have left out the “As I’ve grown up” prelude to thise phrase:

As I’ve grown up, I’ve come to realize the gravity of what file-sharing means to the musicians I love. I can’t support them with concert tickets and T-shirts alone. But I honestly don’t think my peers and I will ever pay for albums. I do think we will pay for convenience.

If you read it carefully, this is a beautifully crafted phrase: “the gravity of what file-sharing means”. Many people seem to be reading this as an admission of guilt or immorality – an adult-onset atonement for sins of the past. I read it more like “I am sorry this sucks so much for you, but it is what it is.” And it is. I don’t know what age has to do with it, or why that was included. It lends credibility to the angle that her stance is representative of some developmental immaturity – that a Good Mature Consumer would be much more responsible, but isn’t she cute? *patpat* The reality is that she’s stating, with nothing but facts, how an entire generation consumes music, and she’s being treated like an idiot for it. It’s weird.

« reason automating twitter spam is a bad idea #521343 on connoisseurship »