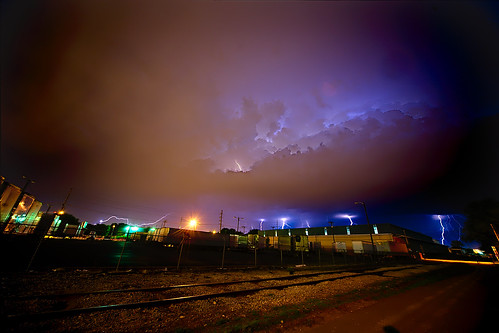 I had someone ask me for tips regarding lightning photography and it got long enough I figured I may as well post it here and just link to it. These are just some random things I’ve had success with. Your mileage may vary:

The general idea for capturing lightning is to take longer exposures in which you happen to catch the bolts in the frame. I usually use anywhere from 5 seconds to 30 seconds, depending on how much lightning there is and what effect I desire – a 30 second exposure will have much more blurred/fluid cloud movement as opposed to a 5 second exposure which would have more cloud definition)..

Either way, a longer exposure is necessary, as no human has the reflexes to catch a lightning bolt. However, a long exposure of a scene metered normally may be blown out subsequently if you get a really brilliant lightning flash, so you may have to underexpose severely so that when you do get lightning, it’s not blown out..

« george carlin and the gay pejorative takahiro, “i know you” »