on snow and driving 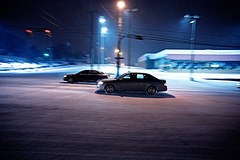 So, every time it snows in Nashville, people invariably fall into two camps:

I will admit that despite my Wisconsin birth, I fall squarely in the first camp – since I never lived there when I was driving.

Every year I make this point to anyone who will listen, though, so I figured I’d post it as well:

Snow in the south is not the same, sorry. First, there’s the rather obvious fact that we don’t have as many (or hardly any) plows or trucks to salt adequately for the rare occasions we do get salt, so that makes things harder. Second, and more important: because the south straddles the line between “warm climate” and “cold”, when we do get snow, it’s usually a product of a front that brought in a lot of rain, first. So, everything gets nice and saturated with water and then freezes, and then it starts to snow. So, typically, around here, when you’re driving on snow, you’re not just driving on snow – you’re driving on ice covered in a deceptive layer of snow.

The amusing side-effect of this is that you often have people in camp #2 (arrogant northerner) who scoff loudly at the snow we get here and go out and try to drive in it and nearly kill themselves. I’ll never forget years ago when I was working at the Stockyard, we got some snow in typical rain-ice-snow fashion. There was some hot-shot server from New York loudly and nearly endlessly proclaiming Nashville’s wussiness with regard to snow. He then left, and promptly fishtailed his pickup into a telephone pole right outside the restaurant. Open up, bitch – time to eat some crow! Would you like some help pulling your truck out of the ditch? Holler at me when it thaws, jackass.

Anyways. So, I realize that being able to drive in snow is a point of pride and whatnot, and I also realize that Nashvillians are a bit wussy about driving in snow. But, you should realize that it’s not quite the same as driving in well-plowed/salted ice-free roads in the north, and that maybe we’re wussy about it because we’re averse to dying.

« shovels and rope on spaces »