up with the MSM

For once a blog post referring to the MSM that isn’t about the mainstream media! So, there’s this meme about mechanically separated meat that’s going around. Chicken, specifically. As a quick visit to snopes will tell you, the original text with the meme is riddled with errors and exaggerations – e.g. the meat is never “soaked” in ammonia, nor do they grind up everything in the carcass. But even aside from that, I find the whole thing fairly irritating. Can someone please tell me what the actual problem is, here? Yes, it’s a “gross” picture. Lots of our food is gross before we eat it. A fresh butchered chicken by itself isn’t the most pleasant thing even before it’s ground up. How is this pink paste any more revolting than tofu? 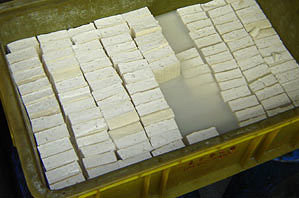 Tofu is made by taking soybeans and blending them up and pressing them into a homogenous juice, and then adding a coagulant (usually Calcium sulfate, Magnesium chloride, calcium chloride, or Glucono delta-lactone), which causes it to curdle. They then press the resulting curd slop until it’s solid and cut it into uniform squares of this hideous white substance. Oh man, can you believe people actually eat that revolting, processed food?!

Seriously, though: let’s talk about mechanically separated meat. Here we have, possibly, the one actual benefit of widescale industrialized meat production – an efficiency of scale. I could just as easily see, if this process did NOT exist, an impassioned, cutting expose about how wasteful the evil food industry is by not even using 50% of the carcasses they process. Jamie Oliver had a clever little experiment he liked to pull on kids, and he was shocked to learn it didn’t work on American kids (see the video here). In the clip, he butchers a chicken and takes the remaining carcass and blends it up and presses out the meat from the bones and uses it to make chicken nuggets. The American kids are not daunted and want to chow down, leaving Mr. Oliver shocked, SHOCKED that they’d eat something so bad. While this may be an example that Americans are less aware and critical of what’s in their food, I fail to see (in this case) what’s so gross or unhealthy about the food he made. It’s fresh chicken. People have been making the most out of animal carcasses (out of necessity) for millenia.

I’m not one to defend food inc., here, but come on, people.. get a grip. Mechanically separated chicken is not the biggest problem we’re facing. If you want to get serious, let’s talk a little about corn. Now THAT’S gross.

« humor is hard on smoking »