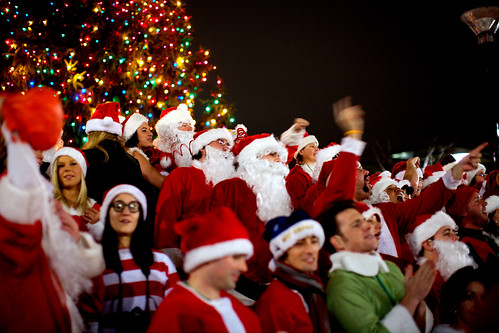 Look at the guy’s finger. His finger was moving faster than the shutter speed (1/40s) on that exposure – hence the motion blur. The shutter was open the entire time. Why, then, the “stuttering” of the motion? Shouldn’t it be one continuous flow of motion? Notice there are three distinct highlighted spots. I had seen this before and wondered about it and raised it to some friends of mine, and we gave it some thought and realized why. The light in that photo was coming from the city street lamps in the public square park – surely on a 60 Hz circuit, like all power in the US. The exposure was 1/40s. Three “pulses” in 1/40 seconds = 120 “pulses” a second. Two “pulses” (peak and valley) == one “cycle”. 60 Hz. Hence the three bursts of light in the 1/40th of a second. Science: it works, bitches.

Second, some personal validation of my decision to drop a shitton of money on camera gear, via a veritable case study. Had the opportunity to recreate a shot of my friend Chris and his girlfriend that they liked, last night – in near identical lighting circumstances (Click to view the large versions): 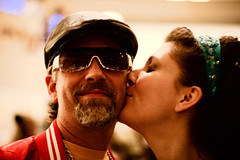