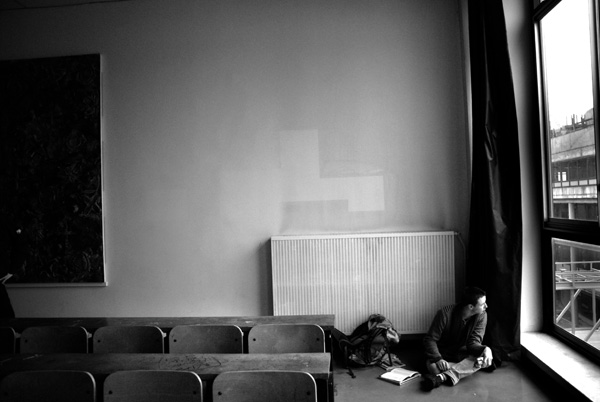 The winners claimed that the idea was hatched a year ago when they looked at all the work students were competing with for the 2008 prize. They realized that the “world view of this work was limited and seemed more like vacation photographs as opposed to photojournalism. The photographs depicted small children with big wet eyes in order to illustrate the misery abroad.”

Speaking to Le Figaro, Guillaume Chauvin confided that they “wanted to enter the contest in order to show the codes used too often in photojournalism and to prove that something real could be translated into something staged.”

You can read more in French here at Le Figaro. This is pretty interesting – it reminds me of course immediately of the “Sokal Affair”, in which physicist Alan Sokal submitted a completely nonsensical article on postmodernism and quantum theory to the sociology publication Social Text. The reactions to this latest fraud seem to be similarly mixed: some waving a dismissive hand at what they perceive to be nothing but a puerile betrayal of trust, and others that see it as a rightful condemnation of sloppy standards and circular back-patting.

The circumstances are slightly different, of course. Sokal’s main point was to to demonstrate that the criteria for publication in a small subset of journals had left the realm of rationality based on scientific merit:

My goal isn’t to defend science from the barbarian hordes of lit crit (we’ll survive just fine, thank you), but to defend the Left from a trendy segment of itself. … There are hundreds of important political and economic issues surrounding science and technology. Sociology of science, at its best, has done much to clarify these issues. But sloppy sociology, like sloppy science, is useless or even counterproductive.

Photojournalism is trickier, though, since we’re not in the scientific realm of hypothesize, test, verify, repeat.. Sokal’s paper was complete nonsense (along with some moments of pure hilarity) – whereas the fake pictures submitted by Chauvin and Hubert, other than being fabricated, are not bad. So what have they demonstrated, here? If you look at the pictures, there some clearly cliched aesthetic attributes – stark/bleak B&W, liberal vignetting, etc – that are perhaps amusing to poke fun at. But what intellectual dishonesty have they unveiled? I’m having trouble thinking of any. If you’re going to evaluate the quality of photojournalism, I guess, you have basically two angles:

I’m sure every photojournalism student in the world would maybe cringe at my ignorant summary, but hey. So, if you’re the review board for an award like Paris Match’s, I guess you’d want to at least vet the submissions based on the above two pieces of criteria. Clearly, they failed on the first – but I am not really sure how you ever could verify authenticity. Isn’t there inherently a certain measure of trust involved in something like photojournalism? Sokal’s fake journal piece was not only not “real” – it also wasn’t “good”, which was his primary point. Conversely, this hoax seems to focus on the fact that it wasn’t “real”, which strikes me as much more banal betrayal of trust with no real redeeming critical impact.