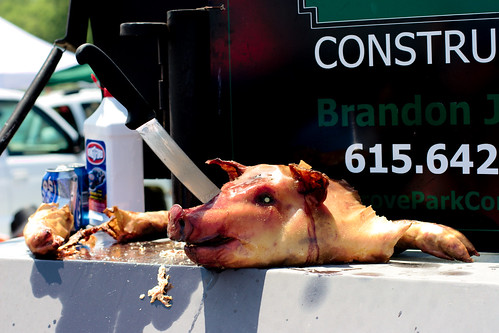 "The more violent the body contact of the sports you watch, the lower the class." -- Paul Fussell

Ah, the American class sytem. If we hold Fussell’s quote as truth, where, then, does Steeplechase fall? It really is a remarkable assemblage of people. If you haven’t gone before due to any assumptions or misgivings you’ve had, please reconsider – it’s people-watching paradise. The entire thing fascinates me.

This year, thanks to CeeElCee and Fishwreck, I was hangin with the upper crust this year in the Stirrup club. None of this red-band nonsense like last year – this year I was a SILVER band. Jackson and his lovely wife Sabrina were nice enough to pick my ass up downtown. The hilarity started as soon as we arrived – our silver bands guiding us like a homing device to an empty air-conditioned shuttle, where I took a seat directly next to Jackson, waiting for the inevitable sardining to commence. Suddenly, I overheard a commotion to the front as a boarder was turned away, “Sorry, red-bands need to take a different shuttle – silver bands only.” We then closed the doors and took off, 7 passengers in a 35-person shuttle. I scooted out away from Jackson and put my leg up. “Fucking red-bands,” I thought to myself.

A short jaunt through percy warner park later, we arrived at our destination, despite a minor 10 minute traffic jam, which we slowly realized was only 10 feet from our destination anyway. (The ladies in our shuttle didn’t want to get out yet, because 10 feet in these shoes is still a long way!). 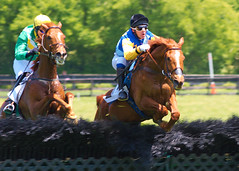 Horses jumping over a thing.

Things weren’t really that much different in the Stirrup Club than what I remembered of the infield from last year, but it’s always the little things that differentiate, right? Still had a row of portapotties, but there was no line. (They were, however, setup on a road with a precarious 15 degree slope. As Jim noted, if you weren’t feeling drunk before you went to pee, you definitely were afterwards.) Lots more space, and about 1/10th the people. And a fewer percentage of the hats were bought at Target the night before (I mean, I couldn’t tell, but I’m just guessing.) There was still plenty of bud and miller light, but each can was lovingly coozied and balanced by an equal number of flutes and glasses of champagne and sangria.

We setup a quick calcutta-alike on the first race (I lost), and then wandered down to the fence, where I took a few snapshots with my fancy new telephoto lens. As tempting as it was to sit in the shade drinking sangria in the pleasant hillside breeze, I felt an obligation to go experience all that Steeplechase has to offer. (Boobs) So, armed with my people-takin lens, I ventured off to the infield. Now, no matter how many times you look at a map of steeplechase, in my experience the best way to get from point A to point B is to just wander around until you accidentally get there. It was on this trek that the true power of my silver wristband really showed itself. I felt like I was backstage at a rock concert. “Sir, you can’t go back there, do you ..” *flashes silver wrist-band* “Oh, sorry, go ahead.” Actually, I did get turned away from a few places because it wasn’t the right gate for me to cross, or whatever. I’m sure there’s some gold or platinum wrist-band that gets you all access. Or maybe a solid gold hat. Anyways, I digress.

On my way to meet some friends, I stumbled into the area of the infield that can only be described as “the pit”. I don’t actually know if this is in the same physical place every year due to ticket price, or if like-minded fellows happen to find one another, but it was there last year as well. How to describe it .. Have you ever seen Lord of the Flies? Yeah, it was kinda like that. With beer. The above picture of the unfortunate hog was in the middle of a crowd of about 10 shirtless young men playing some sort of primitive form of handball with full cans of bud light. One of them nearly took my head off with a can, but I parried with a dodge and a hand on his back. Big mistake – he turned with a “time to dirty up someone’s seersucker” look in his eyes, which fortunately turned to recognition. My brother’s roommate. Saved, this time. He told me to meet them later at their spot, with promises of hunch punch they made. “Bring some chicks, they love that stuff.” 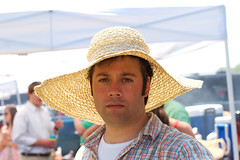 Belle of the Ball

Finally, I managed to find my friends (using the stumble-upon approach), who were embroiled in the process of hitting on and/or getting kicked out by a lovely group of young ladies. It was around this time that I started ranting to Kevin about how amusing I find Steeplechase – the seeds of this post, probably. A few beers and a few ladies’ hat sizings later, I figured I should stop being rude to my hosts and get back to the Stirrup Club.

Shortly thereafter, my ride decided to head out, and I was feeling a little under the weather as well, so I left early (unlike last year). A quick shuttle ride and car ride later, I was home. Stark contrast to the massive traffic jam and heat-stroke/swimming drunkenness I had to fight through to get home last year.

The class displays at Steeplechase are endlessly amusing. It’d be easy to write-off a horse race as some pretentious upper-class affair, but that probably stopped being true around 1850 or so, at least in this country. And it’d be equally easy to look down your nose at the teeming masses of sweat and stale beer in the infield. It’s not a serious affair – everyone that goes pretty much has the same goal: drink some beer, eat some food, ogle sundresses and seersucker, and maybe, just maybe, see some horses race. There’s nothing too pretentious about it, really, at least there shouldn’t be. The most ostentatious display of class indicators tend to come not from that class itself but rather those that the most aspire to join it.

See you next year.