Lately I find myself loathe to take out my Canon 20D for day to day picture taking. Part of this is because I’ve been trying to play around with film more, but lately I’m realizing it’s more than that. It’s not even the film at this point that is capturing my interest. Film certainly has its moments, but by and large, it’s still a giant pain in the ass. But what keeps me at it is not the film itself – it’s the cameras. By delving into the world of film, you basically have at your disposal a century (more if you have deep pockets, i guess) of awesome camera engineering. I have an aesthetic and maybe almost fetishistic attraction to these cameras. The nerdy engineer in me really loves all the different designs, contraptions and functional mechanisms in these devices. 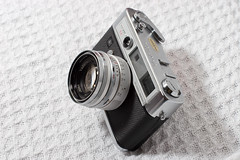 The Yashica (Lynx 5000e) I have, which I bought for a mere $15, is really a work of art. It’s got this gorgeous stainless steel top on the black plastic body. No matter how many times I’ve taken it apart and put it back together, all the pieces still fit snug, with very little give. It feels solid, heavy and dense. I used to joke with whatsherface about how we can always tell if something is good by whether or not it’s heavy/dense. I think this is an aesthetic qualification that probably goes back a long ways. Leaded crystal is very dense and thus heavy compared to regular glass, thus it’s better. We like a car door to have a heavy feel, with a solid thunk as it slams shut. Next time you’re out shopping for something – anything, really – pay attention to how you analyze it in a tactile sense. Ten bucks says you pick it up and sorta weigh it in your hands to gauge its quality. It’s almost a subconscious tendency. As we move increasingly into the digital age of the integrated circuit, this is a tendency that will probably increasingly go away, but with me, at least, it’s still alive and well. I feel like I could bludgeon someone to death with this camera and it’d still work.

But I digress. So I finally fixed the light sensor on this camera a few months ago. My dad long ago indoctrinated me into the “take it apart and put it back together” methodology for fixing something. You’d be surprised how often this works. So, after taking this camera apart, staring at it confusedly, and putting it back together around 5 or 6 times, I took it apart one last time. Though this time I pulled the cap a little too hard and ripped the wires for the light sensor clean off their mount. Re-soldered them back on, put it back together, and voila. Working light sensor. I guess the wires were just a little loose and/or corroded.

So I’ve been taking this camera out a lot more. Beyond my aesthetic attraction to it, I’ve discovered a newfound practical benefit. I love my 20D, but basically a DSLR is a magent for attention – negative or positive. Slap a lens as big as the 200mm 2.8L on it, and you may as well give up trying to be inconspicuous. Pretty much anywhere you go to take pictures you’re either going to intimidate everyone into submission or attract very annoying attention. (“Say, that’s a PROFESSIONAL camera, you work for the papers?!?”) Conversely, with a camera like the Yashica, I just look like any ol’ tourist, if people notice me taking pictures at all. Granted, it’s a camera with a 50 year old design, so you can always tell when some random photographer walks by and double-takes at it. But by and large, you’re just some schmoe taking pictures.

But, nonetheless, film is still a giant pain in the ass. This is why increasingly I have been thinking about buying some sort of pseudo “professional” compact camera – where “professional” just means manual controls and awesome performance. I don’t think there are any cameras that are quite there yet. The Ricoh GR-D II is pretty sexy, but it has an astronomical price, and is only marginally better than something like the Canon Powershot G-9. And that camera has some pretty serious noise problems at higher ISO. I guess I’ll wait. But I do see a market for an inconspicuous professional-grade camera, and I hope to take advantage of it if the cameras ever get bad-ass enough.