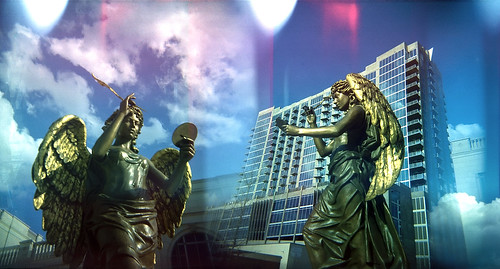 My dallying with film continues unabated. The above shot was the only worthwhile result from 2 rolls of Kodak Portra 400UC that I ran through a Holga 120S that I borrowed from a friend. The Holga didn’t have the framing bracket on the first roll, but I shot on the 16 exposure setting, resulting in the overlap from frame to frame. When I had it developed, I had them scan it, and they made a pass at scanning frames from that roll, resulting in this, which was nice. But, I cut the film original and re-scanned it and got a nicer scan with more artsy overlap goodness. I like the result a lot, although I have mixed feelings about its conception. I don’t consider it to be indicative of any particular skills that I have. Holgas really are the original point-n-shoot, after all, having no manual controls … whatsoever. But hey, I’ll take it. I’m still getting the hang of using my scanner – I am gonna try my hand at scanning some more once I finish plowing through a roll of cheap Kodak color film in my Yashica, and some B&W Ilford 120 125 film in my Seagull. All in all, it’s been fun playing with film, but I’m still not convinced it’s worth it, much less making the leap to developing at home.

Speaking of my scanner, I went a little nuts this weekend and scanned some stuff.