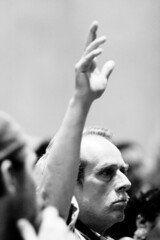 Just got back from an exhausting but enjoyable evening.. I went to the public safety forum at the library after work. Let me start by first saying that I’ve dumped a lot of vitriole about the attitudes about the homeless in Nashville that I’ve perceived – it’s something that I’m passionate about, and I am disgusted by a lot of what I see.

But I’ve lately tried to soften the rhetoric and be more engaging.. After all, these people are my neighbors (and you catch more bees with honey than vinegar, right?). Last week over at nashvillecharrette.com I discussed the Scene’s recent article Outlawing the Poor by Jeff Woods (who I have a feeling got some info/inspiration from recent blog posts I’ve made, but maybe that’s my egocentric imagination). As I wrote over there:

I like Skip and Ben and I don’t think they’re bad people. But I do agree with Woods’ editorial eye-rolling at the claims by both of them that they are pioneers because they’re living downtown. I mean, come on. If you wanna be a pioneer, move to lower antioch. That’d be impressive.

But, despite the fact that his article paints all of us with the same brush, I don’t disagree that the attitude he describes is pervasive. Yes, it’s anecdotal, but I’ve spent a lot of time at URA meetings, downtown partnership events. I’ve heard people scoffing at the idea that homeless people could be “allowed” to vote, propositions of “rounding them up” and shipping them to Memphis heard with a straight face, claims that “homeless people don’t have rights, homeowners do, and it’s time we start acting on them” (actual quote from a URA member), people from metro blaming the swallow/pigeon problem on homeless people (?!).. The list goes on. I’ve got lacerations from biting my tongue at these meetings. Before anything gets better, this attitude has to change.

So after this discussion, I have to say that this public forum was (mostly) encouraging. The forum was ostensibly to discuss “public safety”, but of course the only thing discussed (with a few exceptions) was homelessness, panhandling and affordable housing. A few people stood up to discuss other issues of public safety (which is also good), but were quickly drowned out. I don’t think people grasp how large this conversation/debate has grown, or how pervasive it is. So, it was still a lot of talk (and Nashville is really good about talking about solutions for our homeless problem), but it was at least an open dialogue. The few pictures I took do represent what happened all night – lots of different people getting a chance to speak their mind. And it’s hard to go wrong there. 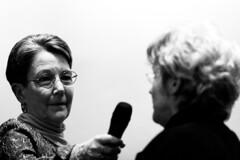 There were some definitely cringe-worthy moments.. a crazy guy heckling and yelling (apparently Charlie Strobel and the CHD could have “cured homelessness” years ago, but they like getting paid. yeah. what?). Then there was the jack-ass of the night who gave a long speech about how homeless people were all just looking for a handout. He even recommended that the homeless people all pull themselves up by their bootstraps. I’m not making this up. I didn’t think people actually said that anymore. There should be some sort of Godwin’s Law for that expression, or maybe it could at least be one phrase in a form of Republican Lingo Bingo or something. Fortunately this woman got up later and very politely and quickly rattled off some statistics about the percentage of working homeless, living wage gaps, etc. and recommended he hop on the Internet to read a little more. Nicely done. And, you know, I call him a jack-ass, but I found my reaction to his little rant to be surprisingly sad rather than angry. It’s sad and frustrating to see people that can still think this way. Hopefully he’s a minority.

And lastly, a guy in an NHPP t-shirt stood up and said he thought it was a sham that we were using codewords like “quality of life” and “public safety” to discuss what’s really a full-frontal class war. Cringe-worthy, yes, but, you know – he’s right. Sorta. But, his comment didn’t really add anything to the forum except to add to the already tense feeling of divisiveness, and worse, it sorta misses the larger fact that class wars are fought along lines of structural institutions, bureaucracy, and years of culture and prejudice. And they aren’t won by demonizing individuals.

Anyways, I digress. So, there were comical or tense moments, but by and large everyone was civil. And I was actually impressed by the bulk of the comments being well-reasoned and sympathetic to the homeless in Nashville. I was also surprised by how quiet the URA and downtown partnership contingent were throughout – I don’t know if that’s because they didn’t have anything to say or because they were listening or swayed, so maybe that’s a good thing. Overall I thought it was a positive experience. I don’t know what this task force is expected to do that the homelessness commission couldn’t be doing or why, but here’s hoping.