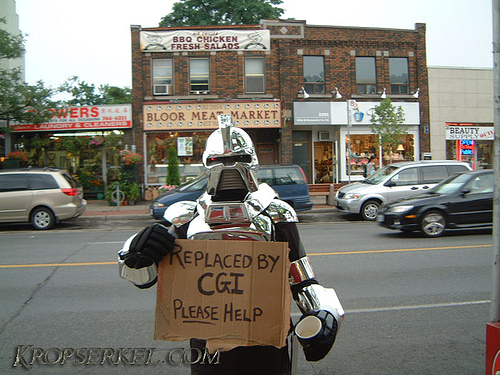 So, I finally watched Battlestar Galactica: Razor. Minor spoilers and extreme nerdery below:

I thought it was awesome – and, I didn’t really see the big deal about the lesbians in space. (See here for discussion.) I didn’t see this particular instance of lesbianism as anything insidious. Katherine suggested that the portrayal of lesbians so far has always been conniving in some way, but I didn’t even get that here. I saw a relationship between Cain and Six/Gina developing that was supposed to be largely genuine – remember that at this point in the story these cylons were rarely self-aware until they were put into action in some way. It adds an awesome amount of depth to this particular plotline in elaborating on the trauma of the Gina/Six version, as well as expanding on Cain’s particular homicidal/suicidal bent. I liked it.

I think it’s important to scrutinize the influence of social norms on our art – for example to find and criticize portrayals of homosexuality that are blatantly biased, unfair, or representative of untrue stereotypes. However I think it’s equally important to realize that as portrayals of homosexuality become more commonplace and accepted, inevitably their homosexuality isn’t really going to be the defining attribute of the character. Sometimes there are conniving characters that happen to be gay – it doesn’t mean the show is making some grand statement that all gay people are conniving. As we move into a more sexually progressive era (are we there yet?), eventually we’ll get to a point where not every homosexual is a flaming stereotype to really drive home the point (a homoSEXUAL on TV why i NEVER!!). They’re just, you know. Gay.

This is why I really like the lassez-faire attitude towards Captain Jack’s sexuality in Doctor Who/Torchwood. It’s not a tremendously overbearing part of his character – he just happens to fuck everything that moves. No big deal.