There’s a moment, right when someone realizes that their picture is being taken, where it goes from being a candid to being … something else. Some people, in a fit of self-consciousness screw up their face, throw horns, scream and make a contorted face. Some people turn and give a big cheesy smile. Some people just freak out and shy away from the camera. But there’s this small subset of people that are either used to it, or remarkably self-confident, and there’s a slight, barely perceptible change where it goes from candid to a nice, relaxed portrait. (I’ve noticed they tend to be good-looking people – I suppose because they’re used to having their photograph taken. I’ve given up any sense of shame over overtly taking pictures of good-looking people. It’s not my fault they’re so good looking.) Anyways, these tend to be really awesome pictures, and it feels awesome when it happens – like it did yesterday. It was perfect. Perfect! And then someone walked in front of the camera: 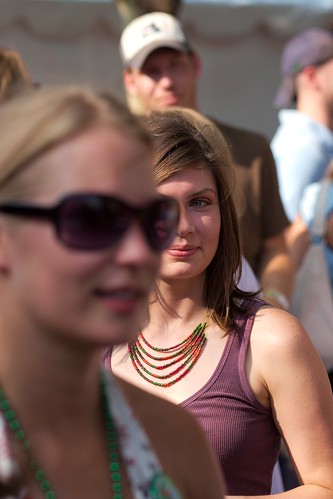