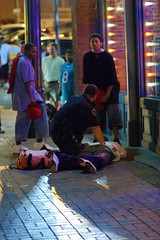 I was at my friend Chris’s place down the street on 2nd last night helping him with his laptop when there was a shooting right outside.. 3 people (only one of which was involved in the initial confrontation) were hit, but no one killed. One woman in his doorway got hit fairly badly in the side.

Chris says this is becoming a regular occurrence, a concern he has been trying to raise at various downtown residents’ meetings. He says the problem centers around “Mystic” which is an afterhours place on 2nd that also has a “teen night” on Sunday which makes it basically thug central, and that the fights are like clockwork. There’s no easy answer that leaps to mind for me – there are so many different elements in a situation like this – issues of race, local politics, downtown community growing pains, policing strategy (or lack thereof), and so on. Chris wants the club shut down, but admits it’s easier said than done. He also wants a bigger police presence. A friend of mine in the central precinct that was one of the first responders said they had a whopping 3 people on duty at the time. Lots of food for thought – more later, maybe, but for now there are pictures here.

UPDATE: I don’t know how reliable this is, but the lady that works at the shop downstairs at the Quarters (where the one lady was shot last night) said she heard that Mystic is already shut down. She said the mayor ordered it somehow (?)

I dunno if that’s legit, but I’ve never seen her happier!