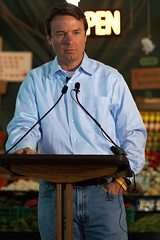 I just got back from the press conference for John Edwards down at the farmer’s market. I have a ton of pics, but I'll process and upload those later.. (Pics are here)

His speech was standard campaign stumping fare.. But there were a few notable things that he announced:

More info is available here at his site. He also took time to let us all know about the Virginia Tech shooting, which is pretty messed up.

Also, on an amusing note. I’m standing there waiting for Edwards to come in, twiddling my thumbs, looking for familiar faces, and I notice the guy next to me looks familiar. Then I realize it’s because it’s Tucker Carlson (sans bowtie). I didn’t realize they had him out workin the normal press beat.

UPDATE: Pictures are up here. I still have a lot to learn about taking pictures of people. Also, I forgot the funniest part of the conference. One of the first questions he fielded was from an older woman in the back who was mumbling incomprehensibly into the mic, which wasn’t loud enough to begin with. He couldn’t hear what she was asking, but I could tell from the key phrases that she was an anti-federalist (and probably a conspiracy theorist) – she was asking him basically about the legality of the federal reserve (see here for background). He handled it well enough once he (sorta) figured out what she was asking, and just said he’d have to learn more about the issue to give a proper answer. True dat.