Will you go see this? (Rocky VI) 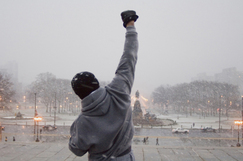 Rocky goes the distance! So do I!! A brief question/answer session:

Look, Sylvester Stallone is old. He can’t fight. Antonio Tarver would make meat pie out of Stallone’s face. It’s completely and totally ludicrous. It’s also a movie. It’s also a Rocky movie. Rocky represents the perpetual American underdog. (To be fair, the idea of Americans as the bootstrap-pulling underdog is a cultural subcurrent that should have expired, oh, about 200 years ago, and has been responsible for centuries of hubris since, but I digress.) Nonetheless, it also makes for some pretty entertaining movies. There’s nothing any more ludicrous about a geriatric Rocky pulling himself out of retirement to fight one last time than there is about a small-time nobody going the distance with champion Apollo Creed. He doesn’t have to win, he just has to go the distance.

Of course I’ll go see it. Why wouldn’t I?

« for the slackers, procrastinators, and perpetually forgetful marshall »