We went and saw Borat this weekend. I had expected more of this movie. I had expected it to be the kind of difficult, but brilliant movie that is shown for years in sociology club movie-roundtable-discussion-nights. I had defended Borat in the past, pointing out that it wasn’t just a dumb cultural stereotype, but that he used that overtly racist, sexist persona to bring out the same latent qualities in the people he interviews. And in this movie, he does, to an extent, but that’s only perhaps 1/4th of the movie. The rest of the movie is essentially Jackass.

It’s funny, don’t get me wrong – I had tears in my eyes at several points. But it wasn’t the brilliant commentary on cultural differences, or scathing expose of American bigotry that I was expecting.

I also realized that Borat isn’t merely a ripoff of Latka. He was also obviously inspired by Mahir. 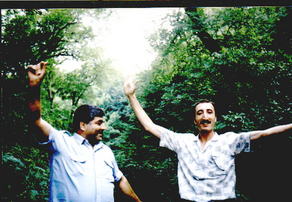