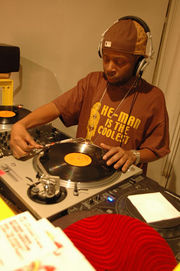 This February, hip-hop lost one of its truly original voices – J-Dilla. A lot of people probably don’t know his name, but just about everyone has heard his work. Even the most far-removed from the world of hip-hop have: Slum Village’s “Get Dis Money” was a highlight of the Office Space soundtrack, introducing JD’s wizardry to many, whether they know his name, or even Slum VIllage, or not.

I’ve been immersed in a drawn-out eulogy for JD purely via my musical taste. First is an actual eulogy, “Can’t Stop This”, on the new Roots album (which is pretty awesome, but that’s another review), which is a tribute to the influence he had on .. well, just about everyone.

[http://www.place.org/~cwage/sounds/RootsCantStopThis.mp3] (The Roots - Can’t Stop This)

But I’ve grabbed two albums that serve, sadly, as capstones to his career, and had some time to really process them.. Donuts, the first, was an album that DIlla made literally from a hospital bed and wheelchair, released only 3 days before his death. It’s the album that has drawn the most focus as his last work – odd, since it’s really not. And I’m glad it’s not, because to be honest, it’s not really that good. It’s not cohesive, or really that listenable. That’s not to say it doesn’t reflect Dilla’s talent – it definitely does. Each track is a brief snippet of samples and beats – some of which are used elsewhere, including “Time: The Donut of the Heart”, which provides the basis for the aforementioned Roots’ tribute.

The second album is “The Shining”, which was around 3/4 done when he died, and post-humously finished and released. This is actually a real, cohesive album, and is a better testament to what his talent could yield at its best: matching JD’s amazing production and beats to talented voices. After a throwaway track with Busta Rhymes (who long ago stopped being interesting to me), E=MC2 opens the album with a great, bubbley track that perfectly matches the flow of Common, the featured vocalist.

“Love”, featuring Pharoahe Monch, is another great one that matches Monch’s style almost perfectly. My favorite though is the last track “Won’t Do”. It closes the album with perfection: a solid, driving beat and Dilla taking the mic for a change. It’s the perfect closer for his career, for me – JD spent the bulk of his career in the shadow of other artists, and this album is no different. But on this track, he takes the spotlight, and closes it out in fine shape. I’ve listened to it over and over – it’s beautiful.

So, although “Donuts” seems to be getting the attention as JD’s final, truncated masterpiece, it’s really not. It’s more like getting a glimpse at an artist’s pallet. Check out “The Shining” if you really want to see the artist at work on a masterpiece.

« the failure of capitalism any takers? »