On the way home tonight, I noticed quite a commotion at riverfront – police, fire trucks and news vans. I booked it down there and realized it was the memorial for Tyra. I wish I had read about it before now so I could have been there earlier. I took a few pictures, none of which really came out: 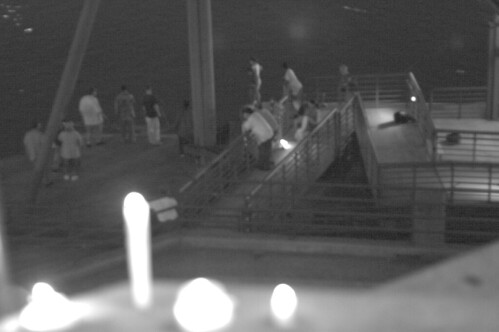 Weirdest moment of the night: I approached 3 people and asked if I could take their picture (I am slowly working up the gumption to bug people to take their picture), and they said sure. The woman with them asked me what I was taking pictures for, and I said “just for myself, and anyone else”, and before I could really finish she said “I’m not homeless.” “That’s alright,” I said, and she re-iterated “I’m not homeless …” and then paused, before quickly adding “… not that there’s anything wrong with that.”

Relax, lady, your middle-class cred is safe with me.