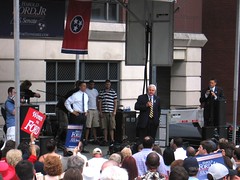 So, while I was waiting for my server to rebuild, I was wandering downtown and some kids stopped me to give me a flyer: apparently Harold Ford was speaking in a few hours. So, I went down there to check it out. Man, what a tool. I mean, don’t get me wrong – I am gonna vote for the guy. But, honestly, people: for the party that is ostensibly representing a progressive movement in this country, I was not impressed.

First, there’s Lincoln Davis, who introduces Ford by first going off on some sort of awkward, deranged rant about Republican accusations that Democrats “cut and run”. If Democrats had been in charge during [some unpopular war], we would have won, dagnabbit! We wanted to stay and fight! And we all know that Vietnam was Eisenhower’s fault .. or something. Honestly I couldn’t follow it well, because the grasp on history seemed a little tenuous and, well, inconsequential. I think he even mentioned the War of 1812. WTF?

So, anyways, then Ford comes out, and kisses Henry’s ass for a while and then gives a very brief speech. Ford is a very good public speaker – very charismatic, likeable, and well-spoken. It’s too bad a lot of it is wasted on such crap. First of all, he cited Andrew Jackson as the ideal model for the Democratic party several times – i.e., “that’s not the country that Andrew Jackson stood for” (paraphrased) and such. I’m sorry. Did he say “Andrew Jackson”? The same Andrew Jackson that owned slaves? Andrew “Trail of Tears” Jackson? Seriously?

The crowd loved it, though, and applauded wildly. Maybe slavery and genocide are still progressive issues in Tennessee. Or maybe they just didn’t know who Andrew Jackson is.