Amanda and I just got two new bikes for $20 a piece. There was some estate/garage sale over on 3rd avenue. Go figure. One of them is a Sears Roebuck “Free Spirit”, which I think was just a re-branded Murray: 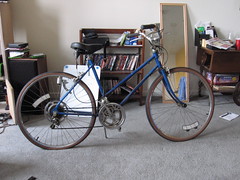 The other is a mystery .. there are lots of branded parts on it, but I can’t identify the frame. There’s a serial number though. Anyone have any guesses? 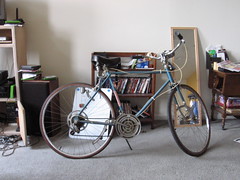 UPDATE: The gear-shifter assembly appears to be “Shimano”, and the seat says “Cruiser”. There’s also something on the handlebars that looks like I-JILL or U-ILL, or something. Hard to tell. I have no idea what kind of bicycle this is.