An interesting emergence from the immigration debate is the topic of flags. In this post, Rev entions Aztlan, while Aunt B notes the parallels between this flag-flying and the flying of the confederate flag.

Is flying the Mexican flag at an immigration rally: 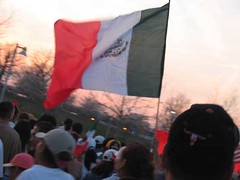 the same as flying a confederate flag in the United States?

What does it mean for an immigrant to fly the Mexican flag? Does it mean that they are a warring nationalist activist seeking to re-instate the former glorious state of Aztlan? No. It means they are proud of where they come from, and they’re using a flag to represent it.

Flying the Mexican flag is not even remotely comparable to flying the Confederate flag.