Bob Krumm raises the undead spectre of TABOR in a recent post. TABOR is something I have commented on only briefly in the past. But the fact that Bob is posting about it is encouraging, because he’s actually capable of civil debate. So I’d like to raise a few objections with his post:

Democratic Party Chairman Bob Tuke worries about the effect of Bryson’s proposed amendment in an “economic downturn,” but he misses the point. This bill doesn’t hurt the state’s ability to spend during a downturn, it protects taxpayers from government’s binges during an economic upswing.

I disagree. The Copeland Cap, as I understand it, is exactly the same as the ill-fated Colorado TABOR legislation (which you’ll note was suspended in 2005 for 5 years to stop the hemmorhaging) in that it limits government spending based on a combination of two things: Inflation as measured by the Consumer Price Index (CPI) and population. The things that governments typically spend money on, particularly during an economic downturn, are the same things which grow in cost at a rate much greater than reflected in the CPI. This means an ability to react to economic changs, demographic shifts, or emergencies at best, and service-level cuts at worst. 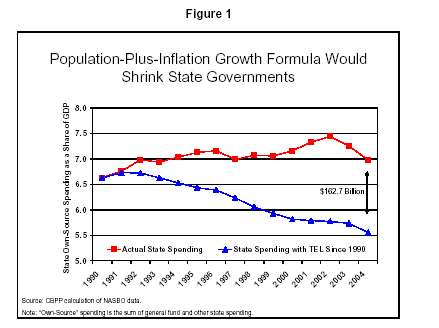 From a cursory glance at Bryson’s proposed legislation, it also looks as if it would also be subject to the “ratchet effect”, which the CBPP has criticized in the past regarding its effects in Colorado:

Colorado’s TABOR and many current TEL proposals in other states contain a feature that causes public services to be cut even more than they would under a simple population-growth-plus-inflation formula. This feature is known as the “ratchet effect.” With the ratchet effect, the population growth plus inflation adjustment is applied to the amount of actual expenditures or revenue in the prior year (rather than to the amount of allowable expenditures or revenues). When state budgets grow slowly or fall, as in the recent fiscal crisis, actual spending or revenues are likely to be lower than the level permitted by the formula. If this lower level becomes the new base to which the population growth and inflation adjustment is applied, then the level of public services is permanently ratcheted down.

Consider a hypothetical state with $1 billion in revenues in 2001 and with population growth plus inflation equaling 5 percent annually. With no ratchet effect, by 2005 allowable revenue would be $1.22 billion (reflecting four years of 5 percent growth, compounded). But if actual revenue collections declined in the first year by 5 percent, allowable revenue collections in years thereafter would be calculated from that new, lower base. As a result, by 2005, even if the economy and tax base fully recovered, allowable revenues could not exceed $1.1 billion — a very significant difference of 10 percent.

I see no evidence that Bryson’s proposal is doing anything to correct the problems with this formula and its implementation – in fact, his legislation appears to be solidifying it. As I’ve said before, if we must enforce spending caps in the constitution, we need a more accurate and representative reflection of Government spending growth to be the benchmark. This TABOR legislation, as proposed, will mean extensive cuts in government services. While this no doubt please small-government advocates, an honest assessment of this legislation would make that clear up front – particularly the possibility for this “ratchet effect” downsizing of government spending and services.

A more honest assessment of Colorado’s experience with TABOR should also be presented. This is a good starting point. As I mentioned before, Colorado in 2005 voted to suspend their TABOR amendment so they could restore some of the cuts that were necessary after a public outcry. Bryson’s legislation appears to be structured in exactly the same way.