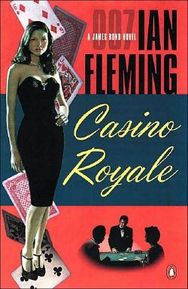 So, last night’s conversation with Jag inspired me to actually bother making a post about this, expanding on my thoughts in a way that doesn’t involve my own weight in beer.

Evidently there’s this controversy over Daniel Craig’s ascension to the Bond throne that has so stirred the hearts of James Bond devotees that they have seen fit to launch a website boycotting Daniel Craig, because he’s clearly not the One True Bond.

There are two angles of criticism that I can offer, here.

First: Frankly, if you are so pathetic and narrow-minded as to develop this cult-like attachment to the ideal of a handsome, suave, dark-haired beauty of a secret agent that you feel compelled to launch a website boycotting anyone that doesn’t meet your fetishized criteria, you’re probably taking it a little too seriously. And you’re probably also repressing your homosexuality. Seriously, just let it out, man. Pierce Brosnan is hot, yes, but so is Daniel Craig, in his own special way. You can learn to love them both.

Second is the actual description that Fleming gives us throughout the Bond novels. But in particular, we should focus on Casino Royale, since that’s the movie in question, isn’t it? Well, in this novel, we don’t get much. We know he has black hair, and a cowlick, and a big scar on his face. We also know that this book involves a very non-“Bond” sequence of events that culminates in James Bond getting the living shit beat out of him and spending the last half of the novel recovering from a severe genitalia-beating incident in the hospital. So we’re not exactly dealing with a novel that dictates a suave Pierce Brosnan, anyway, are we?

So anyways, I think the whole boycotting thing is pretty hilarious. Craig looks to be a fairly charismatic guy. Maybe he’ll suck, maybe he won’t He wouldn’t be the first, he won’t be the last. I think this movie has the potential to go either direction. It’s got a bizarre cast with a lot of potential: Daniel Craig, the hot and slightly scary and demented looking chick from the Dreamers, the guy from Broken Flowers. It could be a nice throwback to Fleming’s original conception of James Bond in a much darker and ambiguous novel. Conversely, it could just wind up being another crappy hollywood Bond movie. I’m cautiously optimistic.