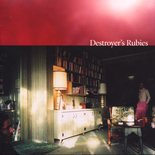 Destroyer’s new album, Destroyer’s Rubies is out. We’ve actually been listening to it for the past week or so because Merge Records has been streaming it on their website via Flash since it came out (which is a genius move, by the way). We just downloaded it from eMusic, though, and so I’ve been giving it a more thorough listen. I like it a lot. The eMusic reviewer says it’s Destroyer’s best album. I’m not willing to go that far, but it’s pretty good. For best album, I’m sticking with Streethawk, but give me a week or so. I’m starting to be swayed while listening to it for this review even now.

It’s a little more .. I don’t know, “traditional” than Your Blues was, which will please those that are big fans of his more straightforward, poppy type stuff. Personally I really liked the feel of Your Blues quite a bit (a brief review here). But where Your Blues felt like somewhat of a departure and a little bit more of an experiment, this album is more solid and refined.

This may be my imagination, but this album feels a little better produced and recorded, too. Your Blues and a few of his other albums sorta had that “recorded in my living room” sound to them. That’s not to say they were recorded poorly, but this album definitely sounds like it got the Nice Studio Treatment. The piano on European Oils is gorgeous, which contrasts nicely with an intense, chaotic fuzz guitar solo that sortof catches you off-guard in an otherwise mellow song.

Priest’s Knees is probably the poppiest song, with an instantly catchy hook. I was walking around singing “And I was just another west-coast maximalist, exploring the blues, ignoring the news from the front..” before we even downloaded the album.

Dan Bejar is shaping up to be one of my favorite artists, and this album is representative of him at the top of his game. Go forth and listen.