Over at NiT Brittney links to Mike Sechrist discussing some of the upcoming changes in the land of broadcast TV and the spectrum it uses, which FCC has finally mandated is going away in 2009. He’s promising more commentary on this topic, and I can’t hold my tongue, so I am gonna go ahead and toss in my two cents.

Brittney asks “Okay, so they want the analog spectrum back, but why is this law? It seems a very odd thing to be legislating, especially if taxpayers are covering the hardware upgrade.” It’s a good question. Kevin, in the comments, offers an explanation, “It has to be legislated at the Federal level. No one can broadcast with significant wattage in the US without FCC approval, which is expensive, scarce, and complicated.”

This, though, is not a sufficient explanation. To really understand what this is all about, I am going to try to succinctly explain the situation (and perhaps toss in a diatribe later).

To understand the issue, we first need to start with a picture of the electromagnetic spectrum:

This is a display of the electromagnetic frequencies from the very low frequencies up into microwave territory. These frequencies of course extend well beyond the confines of this display in either direction, but these are the main frequencies currently utilized for communication purposes (gamma rays are not currently widely used because of unwanted transformations into super-heroes).

The job of the FCC, since its inception, has been the licensing of this spectrum for different uses. It all started when the Titanic sank, and Congress mandated that all ships maintain radio contact. They required that the Bureau of Navigation regulate the spectrum to facilitate this, and this duty was soon passed to the FRC, founded by the Radio act in 1927, and then finally the FCC in 1934. Originally the mandate was simply to accept applications for slices of the spectrum, but they weren’t allowed to actually turn any down. Once the radio age really took off, however, they were forced to start discriminating what constitutes good use of the spectrum. They’ve been chopping up the spectrum for different purposes ever since. (This is a whirlwind tour of the history. For a more thorough treatment, see wikipedia.)

What constitutes a “good use” of the spectrum, of course, is a rather subjective thing, but I’ll get to that. The spectrum’s allotment these days is a sight to behold: 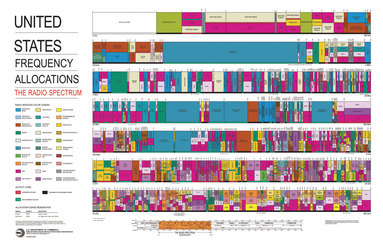 And here’s the rub. When the great land spectrum grab of the early 20th century happened, television broadcasters snagged a sizeable chunk of that “sweet-spot”, and have, by utilizing the intense lobbying of the National Association of Broadcasters (NAB), maintained an iron grip on it ever since.

The FCC however has been in the midst of a decades-long spat between supporters of the NAB and proponents of freeing up the spectrum for use in “public safety”. The FCC these days has largely sided with the latter, though efforts to free up the spectrum have been stymied repeatedly by Congress. The NAB has maintained its grip on the spectrum it owns via a combination of extensive lobbying and stalling – it has wiggled its way out of mandated spectrum-reclamation a few times by dangling the carrot-on-a-stick of HDTV in front of the American people, but never really delivering. They want to keep the spectrum because of course it gives them a limited monopoly on broadcast viewership, which drives advertising, which pays the bills. The irony though is that with the advent of cable TV, broadcast TV viewership is down the tubes (as I’m sure Mike can attest), and the NAB’s attempts to hold on to the spectrum they own these days are really the last, flailing gasps of a dying industry.

On the other side of the ring, the US Government is looking to reclaim the spectrum for two reasons. The first should be obvious: to cash in. The spectrum that the NAB sits on would be worth billions, auctioned off to private companies. (Who, in turn, will use that granted monopoly to further restrict competition in the market and perpetuate a continuing cycle of frustrating and worthless wireless experiences for us all, but I digress.)

They are also facing significant pressure for reasons of public safety. The “sweet spot” that the NAB is sitting on could also be put to good use for use in communication for police, fire, and safety organizations. The bombing in OKC, 9/11, Hurricane Katrina, and countless other disasters in this country have made obvious the need for serious reform in our disaster planning. Communications is one big problem that needs to be addressed. When the planes flew into the towers on 9/11, crews on the ground had great difficulty communicating with people in the towers, and the people in the towers had difficulty communicating with people in the copters. When warnings were relayed to crews in the crumbling towers, some were received, and they got out. Some heard nothing, and didn’t. It cost lives. As Peter Meade, chief of the Nassau County fire department put it, “Television be damned”. I am inclined to agree. Is the failed coordination of our public safety infrastructure really worth it just so that I can watch reruns of Andy Griffith before bed without buying cable?

So, that’s basically it: The NAB is convulsing in its last throes, clinging to its only hope, vested in the radio spectrum that it owns – defending it against the government, who wants to reclaim it, for a mix of altruistic claims of public safety backed by extensive lobbying by the New School of companies who stand to profit from the monopoly rent they can extract from the spectrum they stand to inherit (not to mention the companies, like Zenith, who own patents on the Digital-to-Analog converters that the government intends to subsidize to aid the conversion.)

Now that we understand this all, you can forget it. That’s right, it’s all hogwash. There’s another way. Everything you just read details how the debate is framed in terms of the corporate/government struggle. But it’s framed in terms of decades-old assumptions about radio and communications technology that no longer apply. As usual, technology has already marched on, but the people that stand to profit while sitting on the monopoly spectrum rights don’t want you to know that. [insert fist-shaking and invective against those fat cats in washington here]

Some contend that there’s no reason for government regulation of the spectrum anymore, and that an open spectrum would free up resources and stimulate innovation and more efficient use of the spectrum. This snippet is taken from the Open Spectrum FAQ, and it explains the situation much better than I can:

Technology has evolved since the Titanic went down. The laws and policies in existence today address limitations of the technology of the early 1900’s.

Interference — which we’ve treated as as law of nature — is an artifact of the way radio were designed 100 years ago. If interference isn’t an issue, then the reasons we started to license spectrum become irrelevant.

In fact, the core premise that has undergirded our spectrum policy has dissolved: There is no scarcity of spectrum. It does not need to be doled out. On the contrary, there is an abundance of spectrum.

Our current policies prevent us from benefiting from this abundance.

When radios were invented, they were designed to do one thing only: receive as cheaply as possible. They were much less capable of processing the signals they were receiving. Our electronic and information processing technologies have advanced considerably since then:

Today’s receivers are capable of separating signal from noise well enough that they don’t need “buffer zones” around the frequency they are receiving.

Receivers and transmitters are smart enough to be able to switch frequencies as a particular band gets more congested. As with allowing cars to change lanes on the highway, this dramatically increases overall throughput.

“Software-defined radios” (SDR) can do more with a signal than decode it as sounds to be played through speakers. SDRs can be programmed to treat these signals as encoding any conceivable type of data.

The FAQ has more information, as well. Software radios are a burgeoning field where the decoding of Radio spectrum is offloaded to computers, which are in abundance and much better at it. GNU Radio’s project page has more info.

So, when you hear about this debate between the NAB, local TV broadcasters, the FCC and government safety (which I hope I’ve explained well enough), keep in mind that there is a Third Way – one that could work to the benefit of everyone, without granting artificial monopoly rights based on outdated or false assumptions.

« the AFA is funny musical sanity »