Si Dieu n’existait pas, il faudrait l’inventer (“If God did not exist, it would be necessary to invent him”) 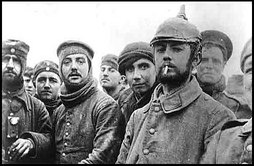 If there were ever one time in humanity’s history where one might be tempted to wish the love and compassion of a God had been invented where it didn’t already exist, it was probably World War I.

I’ve been reading lately about the Christmas Truce. Somehow, amidst the horrors in the trenches of WWI in 1914, the English and the Germans, battle-weary and moved by the sacredness of the Christmas holiday, initiated a front-line truce. There’s a true lesson to be learned in this – one that’s more important than any fabrications or theological wankery you might derive from a story about a messiah being born in a manger.

Christmas is what initiated this truce, but what sealed the deal was a remarkable phenomenon – a spontaneous recognition and expression of empathy, sympathy, and common humanity. This is the redeeming power of religion – that it can spur such aberrations and outpourings of compassion. If only it had lasted, and if only we could harness this sentiment globally without silly religious fabrications to guide us. If there’s a “true meaning” of Christmas I could get with, it’s this. The consumerist cornucopia of Christmas is over, and I could give two shits about it, but we’d all do well to learn a lesson or two from the Christmas Truce.