The NYT has an interesting article about Chavez’s recent economic reforms. He calls it ‘Socialism of the new century’, but it strikes me more like socialist freestylin’. There’s no plan – just a dash of corporate nationalization here, local communes there, aww yeah– BREAK IT DOWN NOW.

Some of the ideas (in theory) sound, dare I say it, kinda cool:

Venezuela is also developing a state-to-state barter system to trade items as varied as cattle, oil and cement as far away as Argentina and as near as Cuba, its closest ally.

“It’s impossible for capitalism to achieve our goals, nor is it possible to search for an intermediate way,” Mr. Chávez said a few months ago, laying out his plans. “I invite all Venezuelans to march together on the path of socialism of the new century.”

It all sounds good and well until you realize that the entire system’s prosperity hinges on oil profits, which are not exactly the bedrock of a stable society, and some warn of a possible recession looming due to a lack of planning. But the populace is not deterred:

“I’m not afraid of socialism and never have been,” said Rivas Silvino, who works in a diaper factory run by workers and managers under a state co-management plan. “The world is afraid. I say, don’t be afraid.”

I don’t think it’s socialism that the world is afraid of, so much as the rise of an creepy authoritarian personality cult (at least among those of us capable of making that distinction). Ahem: 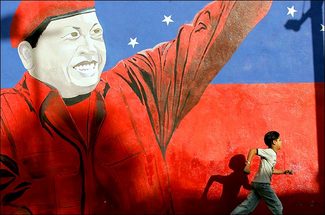