David Brooks has written one of those today. Here’s a taste:

Edwards deserves some praise because he is the only major candidate who talks consistently about the poor. The problem is that he talks about poverty in an obsolete way, which suggests he has learned nothing from the past 40 years.

Edwards talks about poverty in economic terms. He vows to bring jobs back to poor areas and restrict trade to protect industries. He suggests that if we could take money from the rich and special interests, there’d be more for the underprivileged.

This kind of talk is descended from Marxist theory, which holds that we live in the thrall of economic conditions. What the poor primarily need is more money, the theory goes.

The last paragraph is so incredibly ludicrous I don’t even know where to begin. Since when is Marx the only theorist to argue that we live in “the thrall of economic conditions”. Is he implying that the economy doesn’t affect poor people? Well, I guess so. After all, the “theory” that these so-called “poor” people’s problems can be solved with “money” is absurd, right?!

Are you shaking with rage yet? Don’t worry, you will be:

If people live in an environment that fosters industriousness, sobriety, fidelity, punctuality and dependability, they will thrive. But the Great Society welfare system encouraged or enabled bad behavior, and popular culture glamorizes irresponsibility.

We’ve now had a 40-year experiment to determine which side is right, and while both arguments have merit, it’s clear the conservatives have a more accurate view of poverty.

For decades welfare programs funneled money to the disadvantaged, but families dissolved and poverty rates remained stubbornly high. Then the nation switched tack in the mid-1990’s, embracing policies that demanded work. Many liberals made a series of horrifying predictions about what welfare reform would do to the poor. These predictions, based on the paleoliberal understanding of poverty, were extravagantly wrong.

“Extravagantly wrong”? What? I’m sorry. Did I miss something? Too bad Mr. Brooks didn’t let us in on what revolutionary evidence he’s using to back up that claim. Let’s take a look at the numbers on poverty for this “40-year experiment” (Source: census.gov): 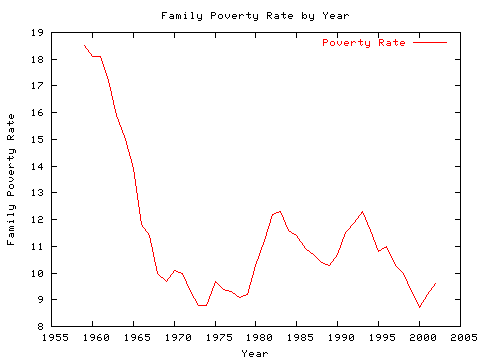 From this graph the only thing evident is the impact of the Great Society welfare enactments in the ’60s and the complete absence of any concrete trend thereafter, including the dismantling of welfare as we knew it in the 1990s – i.e., the complete opposite of what David Brooks is arguing.

He also has the audacity to quote The Truly Disadvantaged, one book that firmly and methodically rips apart the “culture of poverty” ignorance that he is spewing.

It’s difficult to ascertain what David Brooks’ point is. He denounces Edwards and Kerry for resorting to “crude, populist rhetoric” (but provides no examples) while lauding the conservative “culture of poverty” theory as the end-all solution to poverty (without providing any evidence as such). He then concludes with a substanceless summary of the obvious:

While conservatives were right about the basic nature of poverty, liberals are right when they point out that simply getting people off welfare and into the world of work is not enough. Welfare reform means more single mothers are working, but they are having a hard time making progress into the middle class. We’re going to need support programs to complete the successes of the 1990’s.

Well, no shit, sherlock. It makes me wonder if Brooks has even read The Truly Disadvantaged, because this is precisely the sort of thing that Wilson discusses, including the importance of the difficulties faced by single mothers on welfare and the removal of structural forces bearing down on the inner-city underclass. The way that Brooks presents the liberal angle, you’d think they were just dumping money from a a C-130 over the ghetto and hoping it all works out.

He presents a muddled, poorly represented side of both debates. The Truly Disadvantaged is a book that is the complete opposite – a dense, but enlightening book that dissects numbers and policy for the past 40 years and its effect on the inner city underclass. I’d recommend that anyone interested in obtaining a clearer picture of this situation read it – Mr. Brooks included. You could also read today’s piece by Krugman, which should be plastered on every wall in the country. He lays out very lucidly the conservative agenda when it comes to our social programs.