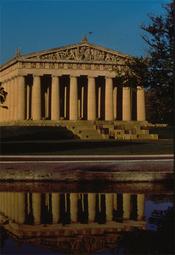 Anyone that has been to the city of Nashville has been to, or at least seen, the Parthenon, a full-scale replica of the original Parthenon in Greece.

What some don’t know about, though, is the equally impressive statue of Athena that graces the interior.

Since the Parthenon was originally built as a temporary structure in 1897 for the Centennial Exposition, it wasn’t built to last. While most of the surrounding buildings for the exposition were torn down, the Parthenon endured, and was eventually rebuilt in 1920. Its plaster and wood was replaced with a more permanent concrete structure.

Missing from the replica, however was the statue of Athena (Athena Parthenos), designed by Phidias, that graced the interior of the original Parthenon. In 1982, the city of Nashville decided to remedy the situation and commissioned Alan LeQuire to design and build a full-scale (some 42 feet) replica of the statue.

For 12 years, it stood in the Parthenon as an unadorned white statue. Although this conforms well to the common misconception of “Classic” art, the reality is that it was missing a crucial aspect: the original statue was painted and adorned with a gilded wardrobe and ivory skin.

Well, I didn’t know this until today, but evidently this was fixed as well, in 2002. The statue has been painted and adorned with 23.75 karat gilding by local gilder Lou Reed. The results are impressive, as you can see:

Check out a page on the gilding process and a photo gallery. There’s also a more detailed gallery and timeline by one of the gilders, Margaret Krakowiak.

« free time We can handle the truth »